'102 Not Out': Amitabh Bachchan and Rishi Kapoor are in top form; the story isn't 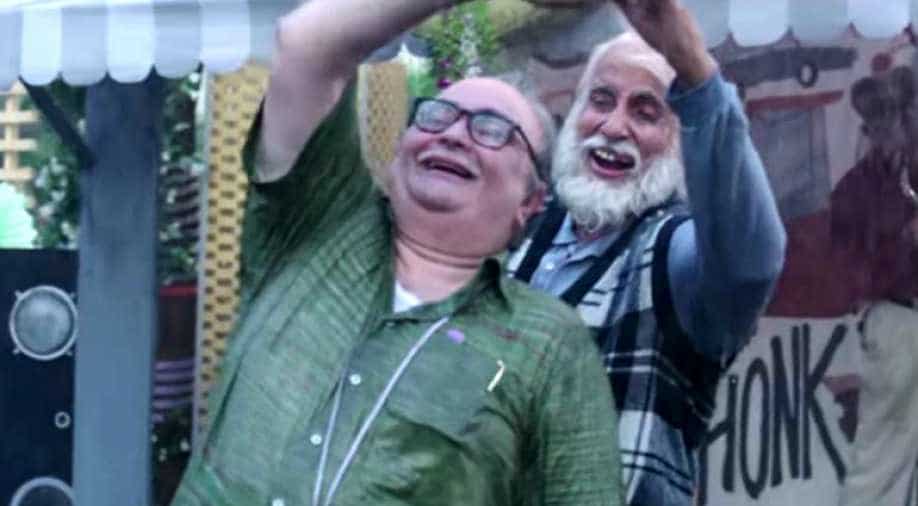 A still from 102 Not Out featuring Rishi Kapoor and Amitabh Bachchan. Photograph:( Others )

Parents will always look out for you. Whether you are 8 or 80, for them you are never quite adequate to do things on your own. A theme that is prevalent in Umesh Shukla's '102 Not Out.'

Based on Saumya Joshi's Gujarati play by the same name, 102-year-old Dattareya Vakhariya lives in the moment and wants to outlive the oldest man in the world who died at 112. 'Only 16 years to go,'he declares to his 75-year-old son Babulal whose personality is a stark contrast from his father. Babulal is calculated man, who lives in the past, mopes too much and generally disapproves his father's way of living life. Which is why Dattareya decides to send his son to an old age home. When Babu resists, Datta agrees to let him stay provided he agrees to certain conditions and performs a few tasks as directed by Dattabhai.

Now, the trailer of the film promised a light-hearted comedy about an uncanny father-son duo. '102 Not Out' is that mostly but dwindles into a mildly melodramatic second half where a Baghban-ish plot comes into fore. That takes away the breezy, light moments which are in plenty in the first half and make you genuinely laugh. To its credit, the film has two stupendous actors- Amitabh Bachchan and Rishi Kapoor- playing the lead characters who take the film forward despite a lacklustre second half. Bachchan and Kapoor are stalwarts in their own right, having won accolades in the past for their films. The two are in top form as they perform to different characters with much ease. Its a delight to watch Big B and Kapoor on screen together after ages and they complement each other performances well.

It's because of these two actors that '102 Not Out' is enjoyable despite the flaws. One can ignore the annoying accent that Big B and Kapoor adapt in parts to appear Gujarati, one can even ignore the familiar story of a forgotten son and a neglected parent for these two actors. One can overlook the one-sided story of two old men wanting more in life as death knocks at their door - simply because Kapoor and Bachchan together deliver endearing performances. '102 Not Out' is a film for the family but with a very familiar story that most of us have already seen on the big screen. It begins on a promising note but eventually is marred by predictability and some very melodramatic lines. It isn't as sharp as Umesh Shukla's 'OMG- Oh My God' either. But it's a film that you would perhaps enjoy on a Sunday with your family - it won't overwhelm you with its emotions, but it will make you enjoy the second innings of two stalwarts of Bollywood.