Padman, Mukkabaaz, Hichki: 11 films to look forward to in the first quarter of 2018 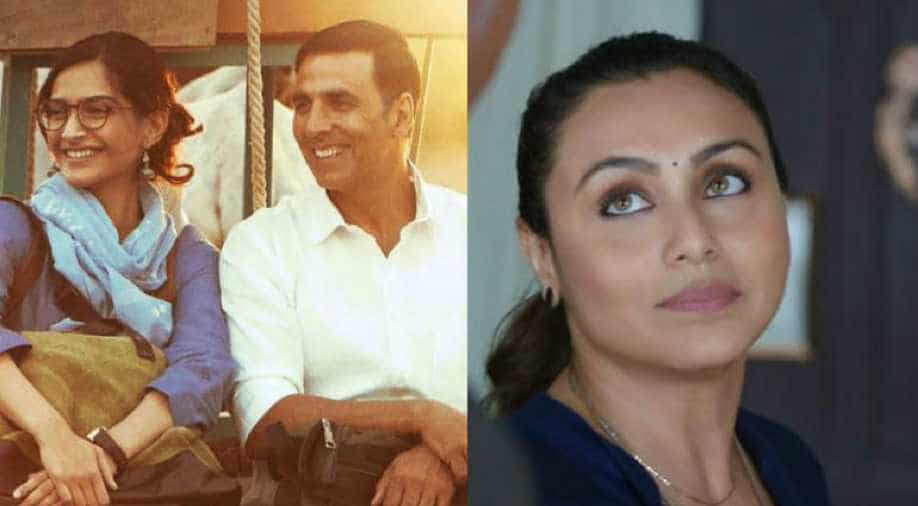 2018 will see some big films releasing in theaters. Photograph:( WION )

2017 saw the success of many middle-of-the-road films. From Hindi Medium to Newton, filmmakers gave audience stories that were thought provoking. The big budget masala potboilers were rejected by the audience as people lauded smaller films.

The new year will see Bollywood churning out some highly anticipated films along with small budget films. The first three months are packed with some very interesting films. From Rani Mukerji's comeback in Hichki to Akshay Kumar turning a do-gooder in Padman - there is much to look forward to from Bollywood. Apart from the big names, there are also films like Mukkabaaz, Pari, Parmanu which will try to strike a chord with the audience. And of course, the beginning of 2018 will finally witness the release of Sanjay Leela Bhansali's grand Padmavat.

Kaalakaandi: There is something about Saif Ali Khan that always appeals. The Nawab hasn't delivered a hit for a long time but continues to generate curiosity thanks to his unique choices in films. After playing the main protagonist in last year's Chef, Khan will be seen in a dark comedy called Kaalakaandi which has an ensemble cast. Directed by Akshat Verma, the film will release on January 12th.

Mukkabaaz:  Anurag Kashyap casts the underrated Vineet Singh in the titular role in his new film Mukkabaaz. Set in Uttar Pradesh, the story is of a lower caste boxer who dares to fall in love with an upper caste girl. Co-starring Jimmy Shergill and Ravi Kishan, the film will have Kashyap's signature style of drama and violence with a powerful storyline. Set to release on January 12th.

Padman: Akshay Kumar turns a superhero of sorts as he becomes a crusader for women in R Balki's Padman. Based on a real-life incident, Akshay Kumar will be seen playing a do-gooder who propagates the importance of menstrual hygiene and creates low-cost sanitary napkins in the film. The film also features Radhika Apte and Sonam Kapoor and has been produced by Twinkle Khanna. Padman will be releasing on 26th January.

Aiyaary- Neeraj Pandey's film on treason will be clashing with the filmmaker's favourite actor Akshay Kumar's film. Set to release on 26th January, the film will have Sidharth Malhotra and Manoj Bajpayee playing members of the special task force.

Padmavat: After protests, bans, cuts in scenes and a name change, Sanjay Leela Bhansali's Padmavat will finally see the light of the day. While the release date has not yet been fixed, but sources state that the film will release in mid-February. Featuring Deepika Padukone, Shahid Kapoor, and Ranveer Singh- it is 'fictional'account on Chittor's Rani Padmini. Since its a Bhansali film, expect the scale to be grand.

Pari: Anushka Sharma's first film post her wedding to Virat Kohli will have her playing a woman who has faced abuse in the past. A thriller of sorts, the film also features Bengali actor Parambrata Chatterjee and has been directed by Prosit Roy. Produced by Anushka, Pari is scheduled to release in the theatre on 9th February.

Sonu Ke Titu Ki Sweety: Luv Ranjan gets his Pyaar Ka Punchnama team back for a hilarious comedy where the girlfriend and the best friend Titu fight it out for his attention. Featuring Katrik Aryan, Nusrat Bharucha and Sunny Singh, the film's trailer has already created a lot of buzz. It is scheduled to release on 9th February.

Hichki: Rani Mukerji's first film post the birth of her daughter Adira has her playing a teacher suffering from Tourette’s Syndrome, a neuropsychiatric disorder that manifests itself in motor or vocal tics. The film traces her journey as a teacher and how she overcomes the problem as well as wins over a difficult set of pupils. Directed by Sidharth P Malhotra, the film should serve as a treat for Rani Mukerji fans as she gets to showcase her acting prowess in a difficult, challenging character. The film releases on 23 February.

Parmanu: We haven't seen John Abraham in a film for a long time. The actor-producer is all set to return on the big screen with a film called Parmanu: The Story Of Pokhran. Co-starring Diana Penty, the film is about based on the nuclear bomb test explosions conducted by the Indian Army at Pokhran in 1998. Directed by Abhishek Sharma, it will release on 23 February.

Raid: Ajay Devgn teams up with director Raj Kumar Gupta to play an Income Tax Officer in a film called Raid. Co-starring Ileana D'Souza, the film is set in the 1980s and has been extensively shot in Uttar Pradesh. Raid will be releasing on 16th March in theaters.

HNY MASS MAHARAJA DEVGN
King of MASS @ajaydevgn with @Ileana_Official on the Set of #Raid ?? pic.twitter.com/cPc6kz4RPg

Sanjay Dutt Biopic: Rajkumar Rao's highly anticipated film on Sanjay Dutt's life has Ranbir Kapoor playing the controversial superstar. With a superstar cast that comprises of Sonam Kapoor, Manisha Koirala, Dia Mirza, Anushka Sharma, Vicky Kaushal and others, Dutt biopic will surely open up stories about the actor and his struggles in life. The film will release on 30th March.