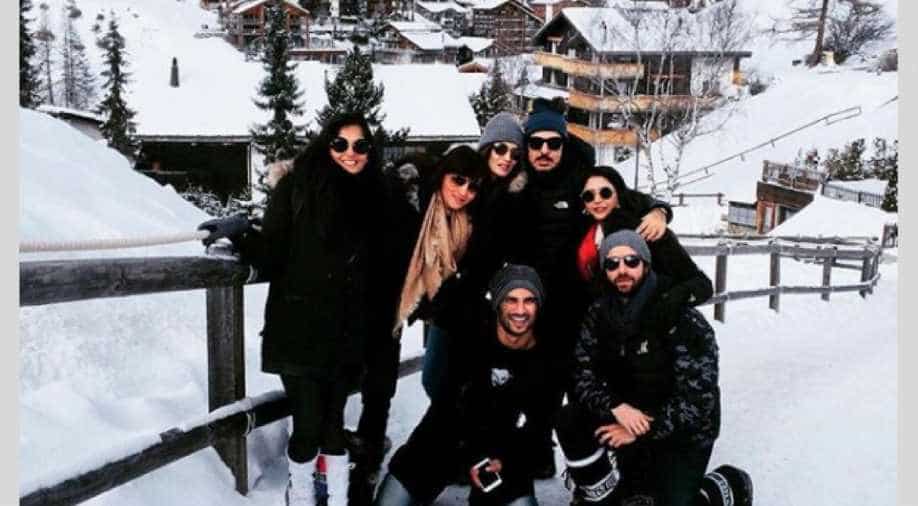 The rumoured couple Sushant and Kriti can be seen enjoying snow in the Swiss Alps along with friends. Photograph:( Instagram )

With the New Years approaching, Bollywood celebs can be seen leaving the B-Town for some exotic location to ring in the celebrations.

One such rumoured couple, "Raabta" co-stars Sushant Singh Rajput and Kriti Sanon were spotted enjoying their holiday in the Alps with friends on December 29.

Sushant took to Instagram to share a picture of them jumping on the snow. He wrote: "And as always, everyone ate too much to jump!! @sharadakarki @tusharjalota @pooj1203 @kritisanon #Dinoo #Guddu Somewhere in #Alps."

He had earlier shared a picture of the snow-capped mountains and the view from his room, writing: "In the end, winning is sleeping better.! #aroomwithaview." It led to everyone speculating whether the actor was in Alps for a film shoot or leisure.

The others in the frame also posted photos from their vacation:

The rumoured couple, Sushant and Kriti have been reported to be dating each other for quite some time now. The "Raabta" co-stars have, however, maintained that they are "just good friends".

In a recent interview with a daily, when Sushant was asked about dating Kriti, he said, "I read about this thing between us, then there were stories about a fight and a break-up and then suddenly, probably because of the Maserati we were back together. They are all very interesting but untrue. We are good friends. She’s an engineer and I was studying to be one too before I dropped out. We’re both from Delhi, big foodies and like spending time together. Period."

When Kriti was asked the same, she responded, "It doesn't affect our relationship. I don't see a reason to justify my relationship with Sushant. We know what the truth is. Over a period of time, I have realised that link-ups with co-stars are part and parcel of the industry. I have made peace with it. We often read stuff about us that's completely baseless. We have always taken it in our stride."

It is reported that Kriti will be next seen in Raj & DK's "Farzi" with Arjun Kapoor.