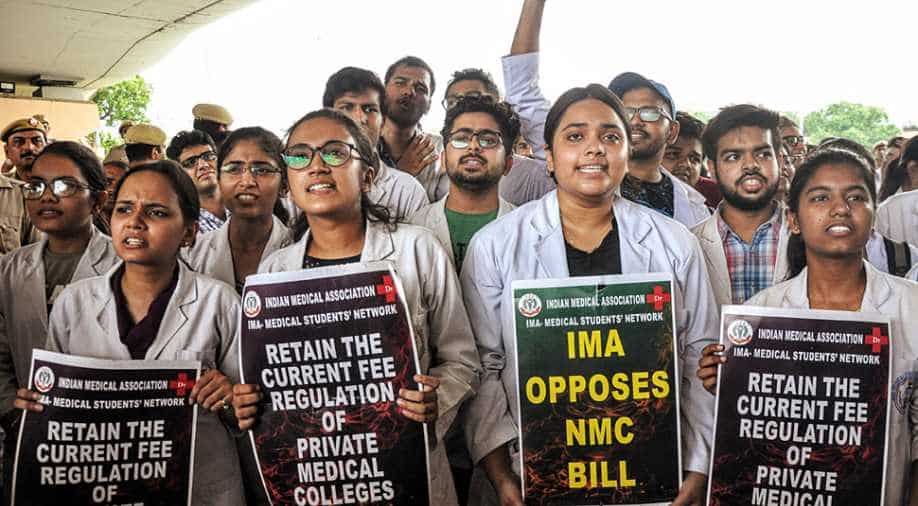 The All India Institute of Medical Sciences Patna and Delhi and United Resident Doctors` Association (URDA) have also given a call for strike against the Bill.

The Federation of Resident Doctors` Association (FORDA) will continue their 24-hour nation-wide strike on Friday in protest against the passage of the National Medical Commission Bill.

The All India Institute of Medical Sciences Patna and Delhi and United Resident Doctors` Association (URDA) have also given a call for strike against the Bill.

Healthcare services are likely to be crippled for the second consecutive day in the national capital as thousands of doctors shut down medical services.

Dr Rajeev Rajan, General Secretary at AIIMS-RDA, said the strike will continue on Friday. "Medical services will be shut down following the protest against NMC Bill," he said.

The NMC Bill will replace the Medical Council of India (MCI) by a National Medical Commission.

According to a press statement issued by Resident Doctors of Safdarjung hospital, the NMC Bill will deteriorate the medical education sector.

Doctors have also been raising their voices against sections 32 and 15 of the Bill pertaining to licence to health providers and the entrance exam for post-graduate course/NEXT.

"Doctors have been protesting against section 32 of the Bill. The NMC Bill will open the gates for quackery by providing licence to community health providers, who do not hold MBBS degree, to practice scientific medication.

There is no certainty on the entrance exam for postgraduate course/NEXT under section 15," Dr Prakash Thakur, president of Resident Doctors` Association at Safdarjung Hospital told.

Dr Sumedh Sandanshiv, president FORDA, said: "We are unhappy and concerned about privatisation of medical education. The NMC Bill will give undue favours to the private medical colleges/unaided universities by decreasing the percentage of seats under the controlled fee structure from 85 per cent to 50 per cent."

"FORDA will continue the strike on Friday. We will agitate till our demands are met," he said.

Doctors have also been raising concerns over section 45 of the Bill. They say that the Bill empowers Central government to override any suggestion of the NMC. The Bill will decrease the representation of elected members from 75 per cent in MCI to 20 per cent in NMC.

On Thursday, Post Graduate Institute of Medical Education & Research (PGIMER), Chandigarh had staged a protest along with the Indian Medical Association (IMA) against the Bill.

Calling the Bill "draconian", PGIMER had stated that the Lower House dumped health care and medical education of this country into darkness by approving the undemocratic NMC Bill, 2019.