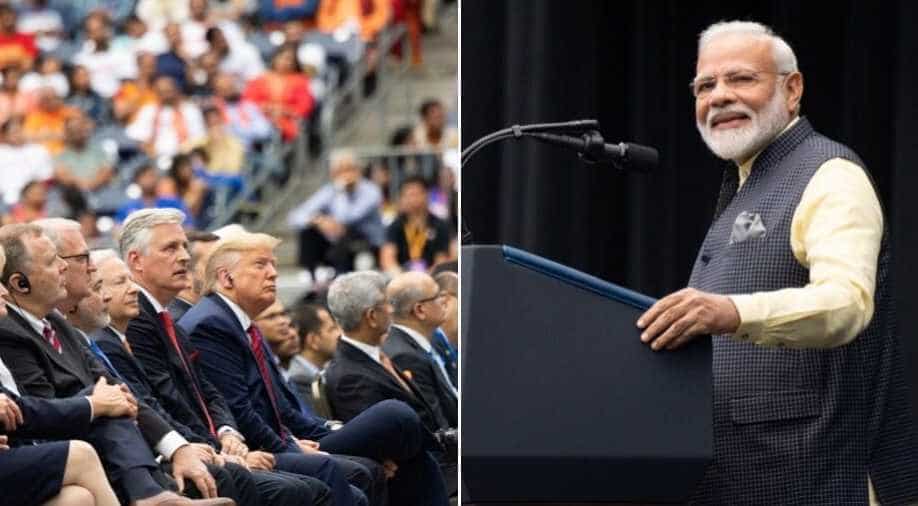 'Our various languages are an important identity of our liberal and democratic society,' PM Modi said.

Everything is fine, Prime Minister Narendra Modi told the leaders and Indian-American community gathered at the NRG Stadium in eight languages as he began his address.

"Because you've asked 'Howdy Modi!', my response is everything is fine in India," PM Modi said, continuing to reiterate the sentiment in about eight different languages including Punjabi, Gujarati and Bengali, to name a few.

"Our various languages are an important identity of our liberal and democratic society," he said adding, "Diversity is the foundation of our vibrant democracy."

Addressing the Indian-Americans community, PM Modi said, on the second October when the country will celebrate the 150th birth anniversary of Mahatma Gandhi, India will bid farewell to open defecation.

"In the last five years, we have bid farewell to 1500 archaic laws," PM Modi also said.

"We are also challenging corruption and giving it a farewell."

"India gave a farewell to Article 370," PM Modi said adding that it "denied Kashmiris their rights."

Referring to Pakistan, PM Modi said, "Some people have a problem with the abrogation of article 370, these are the same people who can't govern their own country properly."

"These are the same people who shield terrorism and nurture it. The whole world knows them very well," PM Modi added.

The event was also attended by US President who addressing the mega-event after receiving a warm welcome by PM Modi, said that ties between India and America are stronger than ever.

"I am so thrilled to be here with one of America's greatest friend PM Modi of India. PM Modi is doing a great job with the people of India," he said.

Pitching for the US president PM Modi said, "We in India connected well with President Trump and with the words of candidate Trump, 'Ab ki baar Trump sarkar', rang loud and clear."

Prime Minister Narendra Modi was presented the key to Houston city upon his arrival at the `Howdy Modi! event here on Sunday.

The Mayor of Houston Sylvester Turner presented a large, golden cut-out of the key to Modi, soon after he reached the venue.

The gesture was made in recognition of the exceptional relationship shared between the people of India and Houston.

The first of its kind event is being held in honour of Modi, who is currently on a week-long official trip to the United States to address the UN General Assembly, amongst other official engagements.

Reverberating with the praises for Prime Minister Modi, Houston's NRG stadium is all jam-packed with enthusiastic India-Americans as the audience.