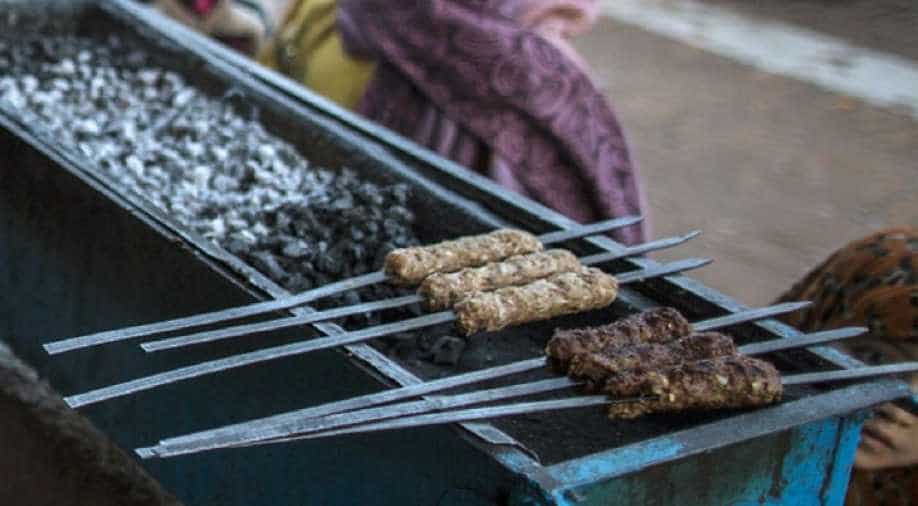 Hygiene and 'sentiments of people affected by the sight' of meat were the main reasons behind the move, leader of House Shikha Rai said. Photograph:( Reuters )

Scrumptious seekh kebabs on skewers and juicy chicken tikkas spread in front of food stalls to draw meat-loving customers may soon have to be relegated to inside shelves in south Delhi, as the area's civic body has proposed a ban on their display in the open.

The proposal was brought in the BJP-ruled South Delhi Municipal Corporation (SDMC) House in its meeting recently and was approved by it, Leader of House Shikha Rai said, adding that hygiene and "sentiments of people affected by the sight" of meat were the main reasons behind the move.

The proposal holds for "both raw and cooked meat" of all kinds, displayed by shop-owners right outside of their shops, he said.

"It was a private member resolution originally moved by a councillor from Kakrola village in Najafgarh Zone in the Health Committee meeting. The committee then moved it to the SDMC House, which then approved it," a spokesperson of the SDMC said.

"Since it was a private member resolution, the proposal would now be sent to the Commissioner to be examined, if it is in accordance with the Delhi Municipal Corporation Act," he said, adding, "He may accept or reject it".

The proposal has drawn a sharp reaction from political parties and the medical fraternity.

Abhishek Dutt, Congress councillor and leader of his party in the SDMC House, said, "This is an interference in people's personal lives. Just because the BJP has majority in the House it cannot make such dictatorial decisions. If it's related to hygiene they should challan those flouting rules. What is the need for bringing in such a blanket ban," he said.

Dutt added that they had opposed the move but due to the BJP's majority in the House, it was approved.

Praveen Shankar Kapoor, Delhi BJP spokesperson, said that the move was taken from public health angle and maintained that there would be no curbs on the sale of non-vegetarian food.

The AAP reacted cautiously to the move, and Greater Kailash MLA Saurabh Bhardwaj, a party spokesperson, said that the proposal should be discussed and AAP councillors would share their views on the matter.

The Indian Medical Association raised an objection to the proposal, saying any food has to be hygienic, whether vegetarian or non-vegetarian.

"We do not find any rational behind the move that prohibits display of only non-vegetarian food outside shops, restaurants. If contamination of food is the concern then why keep out vegetarian food and snacks out of this order," IMA President K K Aggarwal said.

A restaurant owner in south Delhi's Amar Colony area, who did not wish to be named, said that the move was "fine from hygiene perspective", but the civic body should "offer a solution" to these eateries and tell them how should it be displayed properly, instead of just proposing a ban.

"Also, the argument that sight of non-veg food offends sentiments of people does not hold water," he said.