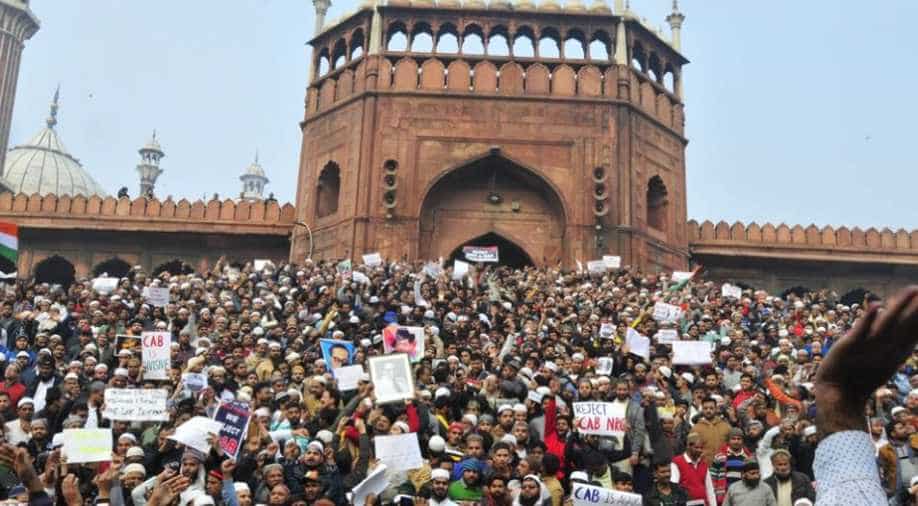 File photo: People gather in large numbers to protest against the Citizenship Amendment Act (CAA) 2019 and National Register of Citizens (NRC), at Jama Masjid in Delhi on Dec 20, 2019. Photograph:( IANS )

Earlier in the day, security was beefed up and patrolling was intensified across north-east Delhi to avoid any untoward incident ahead or after the Friday prayers.

A large number of people have gathered outside Jama Masjid area of Old Delhi on Friday to protest against the newly-enacted Citizenship (Amendment) Act, 2019.

Protestors raised slogans against the Act and the central government. They can be seen carrying placards that read, "Save the Constitution", "Withdraw CAA", "We condemn Communal Law".

Congress leader Alka Lamba was also seen at the protest showing support to the demonstrators.

Earlier in the day, security was beefed up and patrolling was intensified across north-east Delhi to avoid any untoward incident ahead or after the Friday prayers.

The precautions were taken after a massive protest had broken out in Jama Masjid area in Delhi against the newly-enacted citizenship law last week following the Friday prayers.

Police personnel and paramilitary forces were deployed across north-east Delhi in view of the Friday prayers.

"The situation in Delhi is completely under control. We have deployed appropriate forces wherever required. Our senior officials are on the field and are carrying out patrolling. We are also monitoring social media. We would like to urge people to not believe any rumours and to maintain peace," MS Randhawa, PRO, Delhi Police told ANI.

Major protests have been held across the country against the Citizenship (Amendment) Act, 2019, which grants Indian citizenship to refugees from Hindu, Christian, Sikh, Buddhist and Parsi communities fleeing religious persecution from Pakistan, Afghanistan, and Bangladesh, who entered India on or before December 31, 2014.