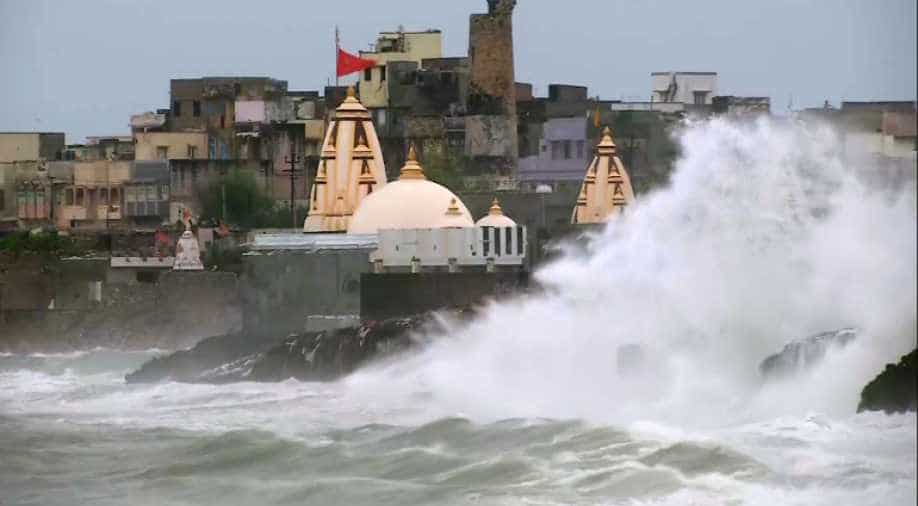 Gujarat Chief Minister Vijay Rupani said, 'According to IMD bulletin, Cyclone Vayu, which was going to hit Gujarat, has moved towards Oman. But the administration will continue to be on high alert for the next 24 hours.'

Sparing Gujarat after changing course, Cyclone Vayu Thursday began moving away from the state coast towards Oman, even as the danger of heavy winds and rain in coastal areas continued, officials said.

Though the "eye of the storm" is away from land, the cyclone's outer periphery would leave its impact on the coast, officials said.

Gujarat Chief Minister Vijay Rupani said, "According to IMD bulletin, Cyclone Vayu, which was going to hit Gujarat, has moved towards Oman. But the administration will continue to be on high alert for the next 24 hours."

Schools in coastal districts of Saurashtra and Kutch will remain closed Friday as a precaution, the chief minister said.

Rupani, who reviewed the situation late Thursday evening, said the cyclone "no longer poses any danger" but the administration in the coastal region will remain on alert.

"The IMD said the cyclone no longer poses any danger as it (has) moved towards Oman without making a landfall in the coastal belt," Rupani told reporters in Gandhinagar.

"The cyclone is very likely to move north-northwestwards for some time and then northwestwards skirting the Saurashtra coast affecting Gir Somnath, Diu, Junagarh, Porbandar and Devbhoomi Dwarka with wind speed 90- 100 kmph gusting to 110 kmph during next 12 hours," the IMD said in a release issued late Thursday evening.

"Though Vayu started skirting from the mainland, the danger is still there in the form of heavy rains or blowing of strong winds. We are not declaring as of now that there is no danger. All our measures will remain in place till tomorrow morning. We are not taking any chances," said Gujarat Chief Secretary, J N Singh.

A dozen talukas in the coastal belt received more than one inch of rain since Thursday morning due to the cyclone, an official release by the Gujarat government said.

Prime Minister Narendra Modi spoke to Rupani and took stock of the situation in his home state, after reaching Bishkek in Kyrgyzstan for the SCO Summit, the release said.

Modi held a telephonic talk with Rupani on cyclone preparations immediately after reaching Bishkek and assured all assistance and support from Central Government to mitigate the effects of Cyclone Vayu, it said.

Though the direction of the cyclone has changed, the cyclone is still dangerous and will leave its impact on the coast despite the fact that the "eye of the storm" is not expected to hit land, state Additional Chief Secretary Pankaj Kumar said.

"A cyclone is not about the eye of the storm. This storm is spread across 900 km. The risk is still there and severe winds and huge waves can cause damage in areas along the coastline. The impact of the storm is important, not the landfall. The state government will continue to remain alert for the next 48 hours," he said.

No casualty has been reported so far due to Vayu, Kumar said.

"People have been advised to stay away from the coast. The situation is still critical. All the ports have been asked to hoist the storm warning signal number 9. Many areas near the coast are now receiving rain. The cyclone may bring very heavy to extremely heavy rain in some areas," he said.

A Coast Guard official said they have been monitoring the cyclone and took pre-emptive actions to ensure that there were no fishermen or boats out in the sea.

In addition, 11 columns of the army (each having nearly 70 personnel), two companies of the Border Security Force, 14 companies of the State Reserve Police and 300 commandos are deployed at different locations in the Kutch and Saurashtra areas.

The state government on Wednesday announced that operations at all the ports and airports situated near the coastline were halted for the time being.

The railways has cancelled 86 trains and short terminated 37 others due to cyclone Vayu, officials said.

Western Railway said the cancellations were made as a precaution even though the cyclone changed its course and is unlikely to make landfall in Gujarat. However, it will cause heavy rain in several coastal districts of the state.

Since all the airports in Kutch and Saurashtra have been asked to shut their operations completely, flights to these destinations from the Ahmedabad airport stand cancelled.