Congress in driving seats in state polls, BJP's bid to return to power in 2019 will fail: Sharad Yadav 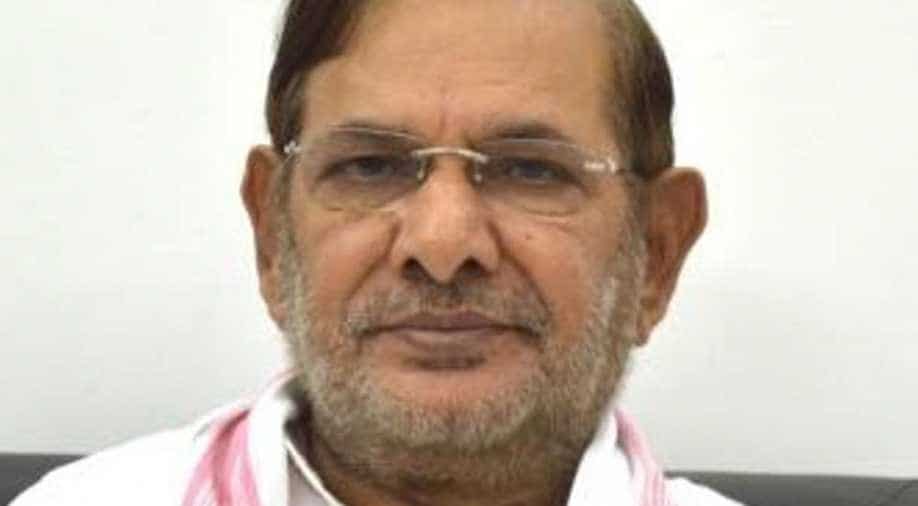 The results of the assembly polls, including BJP-ruled Rajasthan, Chhattisgarh and Madhya Pradesh, will lay the foundation for the Lok Sabha elections next year, he told PTI in an interview.

Opposition leader Sharad Yadav said on Sunday the BJP's hope to return to power at the Centre will be buried in the same states -- Uttar Pradesh and Bihar -- which had propelled it to a big win in 2014, and asserted that the Congress will trump the saffron party in all the five poll-bound states.

The results of the assembly polls, including BJP-ruled Rajasthan, Chhattisgarh and Madhya Pradesh, will lay the foundation for the Lok Sabha elections next year, he told PTI in an interview.

People want to get rid of the Narendra Modi-led government as it has not fulfilled a single promise made to them in 2014, Yadav claimed.

Accusing Prime Minister Modi of resorting to "sentimental" ploys like raking up his tea-seller background while his party colleagues talk of building Ram temple in Ayodhya, the Loktantrik Janta Dal patron said this shows the BJP has nothing to talk about its government's achievements.

"The Congress is in the driving seats in all the five states. People are under distress and want to defeat the BJP. The results of these (assembly) polls will lay the foundation stone for the 2019 Lok Sabha elections," he said.

Working to forge an alliance of opposition parties and win over new allies against the BJP-led National Democratic Alliance, Yadav said they will be united in 2019.

"The BJP had captured Delhi on the back of its win in the Gangetic plains (Uttar Pradesh and Bihar). Its hope of returning to power in 2019 will be buried in the same plains," he said.

The NDA had won 104 of the 120 Lok Sabha seats in Uttar Pradesh and Bihar in 2014 but a likely alliance of the Samajwadi Party and the Bahujan Samajwadi Party has made things much more challenging for the BJP in the politically most crucial state that sends 80 members to the lower house of Parliament.

The BJP has boosted its prospects in Bihar by allying with Chief Minister and Janata Dal (United) president Nitish Kumar, who had fought against it in 2014, but the opposition is working to shore up its support by wooing leaders in the NDA camp.

Yadav had recently met RLSP leader and BJP ally Upendra Kushwaha, and there is speculation that his Loktantrik Janata Dal and the RLSP may merge to boost the opposition alliance.

He declined to comment on the matter but Kushwaha's drift from the NDA is becoming increasingly evident as he said on Saturday that the number of seats offered to him by the BJP for the Lok Sabha polls is not "respectable", setting the deadline of November 30 to the saffron party to sort out the matter.

Attacking Modi for "chasing the Congress with a lathi day in and day out" while "not fulfilling his promises", Yadav said the prime minister rakes up sentimental issues like his tea-seller background to target the main opposition party.

The Congress was defeated in the 2014 Lok Sabha polls and the subsequent assembly elections. There cannot be a bigger punishment for a party than this, he said.

"People elected you (BJP) to power and punished them (Congress). Still, you are chasing them with a lathi day in and out. You do not do your work. You attack them (the Congress) everyday but do not fulfil your promises. People have become so distressed," Yadav said.

Whether it was the BJP's promise on generating employment or boosting the economy and cleaning the Ganga river, none of it has been fulfilled, he claimed and alleged that instead, measures like demonetisation hit people hard and the GST "destroyed" small traders.

These are the real issues on the ground, besides distress of farmers and high oil prices, he said while reiterating that the assembly polls will boost the opposition and set the tone for the Lok Sabha polls.

Assembly elections in Madhya Pradesh and Mizoram are due on November 26, and in Rajasthan and Telangana on December 7.

Chhattisgarh had gone to the polls for 18 seats on November 12 and polling for the remaining 72 seats will be held on November 20. Counting of votes for all the five states is due on December 11.