Congress angry because I am fighting corruption: PM Modi in Himachal 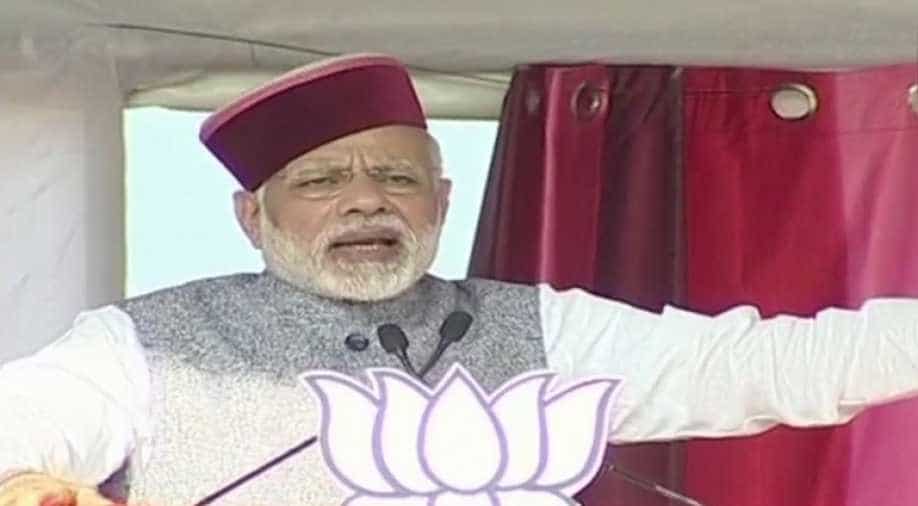 PM Modi said the Congress will observe 'black money day' on the first anniversary of demonetisation on November 8 and burn his effigies, angered over his fight against corruption

Ahead of the assembly elections in Himachal Pradesh, Prime Minister Narendra Modi on Saturday took potshots at the Congress party at an election rally in the hill state's Kangra district.

PM Modi said the Congress will observe "black money day" on the first anniversary of demonetisation on November 8 and burn his effigies, angered over his fight against corruption.

"They're going to celebrate November 8 as black day and burn my effigies. They don't know Modi is a disciple of Sardar Vallabhbhai Patel and won't be cowed down," PM Modi said at an election rally in Raitt, Kangra.

"Congress is angry because I am fighting corruption," PM Modi said.

The prime minister also claimed that senior Congress leaders were not campaigning in Himachal Pradesh because "they have conceded defeat and left CM Virbhadra Singh to his fate."

"I have heard that Congress has lost the trust of its own leaders and is looking for rebels in other parties," the prime minister said.

Likening the Congress to termites, PM Modi said the party must be totally finished off as he sought three-fourths majority for the BJP in the state.

"There should not be one polling booth where the Congress termites are left," the prime minister said. (Also Read: PM Modi slams opposition for downplaying World Bank report)

The prime minister promised that the BJP's chief ministerial candidate Prem Kumar Dhumal and himself would take the state to new heights of development. He had high praise for Mr Dhumal when he was the chief minister of the state

"There was maximum development in Himachal when Atal ji was in Delhi and Dhumal ji was here in Himachal. You have a chance again," he said.

"There was a time when newspapers were full of 2G Spectrum and corruption news all over," he said.

The polling for the 68-seat Himachal Pradesh Assembly will take place on November 9. Results will be declared on December 18.

The BJP is hopeful of getting a clear majority and defeating the incumbent Congress government in the hill state.