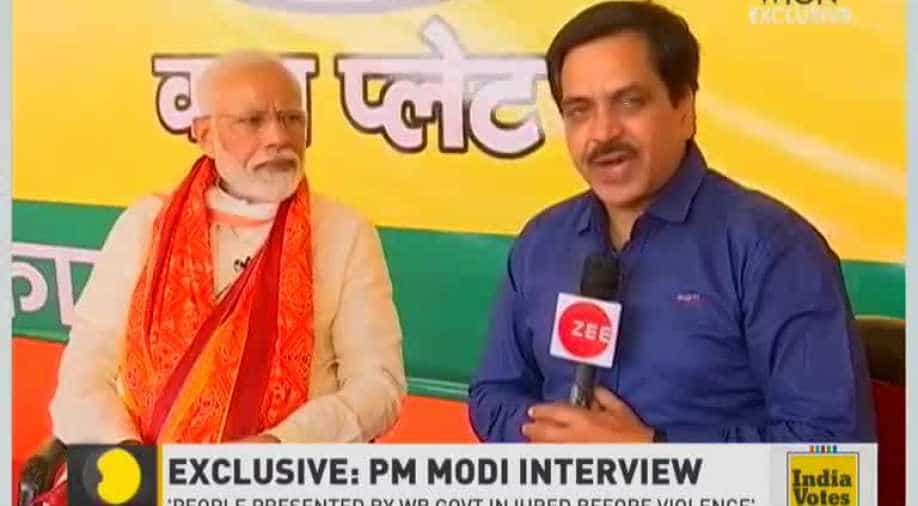 The fact is the Opposition has called my name so many times that it has become a poll issue, PM Modi said.

PM Modi addressed his final rally in West Bengal's Mathurapur on Thursday even as the bitter clash between the BJP and TMC kept rumbling in the background as chief minister Mamata Banerjee held a roadshow attacking the BJP.

The Election Commission(EC) on Wednesday had banned campaigning in nine West Bengal constituencies in the Lok Sabha elections from 10 pm on Thursday night in the aftermath of the violence which occurred during BJP president Amit Shah's roadshow in West Bengal.

PM Modi speaking exclusively to Zee in Uttar Pradesh, emphatically demanded that the CCTV footage of vandalisation of Ishwar Chandra Vidyasagar's statue should be made public. The PM asserted that the TMC wants to win the elections by "trampling democracy".

"Those who are neutral and not supporting us have also demanded that CCTV footage of the destruction of the statue of Ishwar Chandra Vidyasagar should be made public."

"About violence in West Bengal, there were panchayat elections in J&K and also in Bengal, although it was peaceful in J&K but in West Bengal, several people were killed, houses were burnt and polling booths were looted," he said.

"The candidates just to get their nomination had to go to court and take permission. There was so much violence which the country had witnessed at that time," the prime minister said on West Bengal.

"Even before the elections were announced, leaders from the BJP were prevented from landing there, not just this even the prime minister's meetings were targeted."

"The local administration, TMC goons and the West Bengal government have joined together and have been trying to trample democracy in order to win the polls but the people will not bow down to this kind of politics."

"It has been happening repeatedly," the prime minister said.

"My detractors have nothing to say so they are resorting to abusing me and taking out their frustration but I don't want to waste my time," he said. "I want to do good things to the streets, good things to this country and the villages so I really don't think about it."

"It is not a question of my toughness, the people of this country have given me their love and confidence. I also expect myself to be able to deliver results. I need to meet the expectations of the people and I am working hard towards it."

With SP and BSP combining to pressure the BJP in Uttar Pradesh, the PM said: "Most parties and political pundits who call themselves neutral are still affected by the 20th century, they are not ready to understand the 21st century, in 2019, the results in Uttar Pradesh will force them to change their theory."

"The unique thing about this election is that all the slogans have come from the people." "Only Modi will come, when I heard it, I was surprised, there are so many slogans floating around which shows their love."

The prime minister said the BJP will win more seats than 2014.

"The BJP will win more seats than 2014 and West Bengal has become so attached that it will help the BJP alone to cross 300 seats."

"Both the BJP and NDA will increase their tally, their strength, we will also win from new places and we will work for the country," the prime minister stressed.

"In this election, there is a pro-incumbency wave, the people are fighting this election," he said. "The country is far ahead of parties and politicians."