We will take revenge for vandalisation of Vidyasagar's statue: Mamata Banerjee 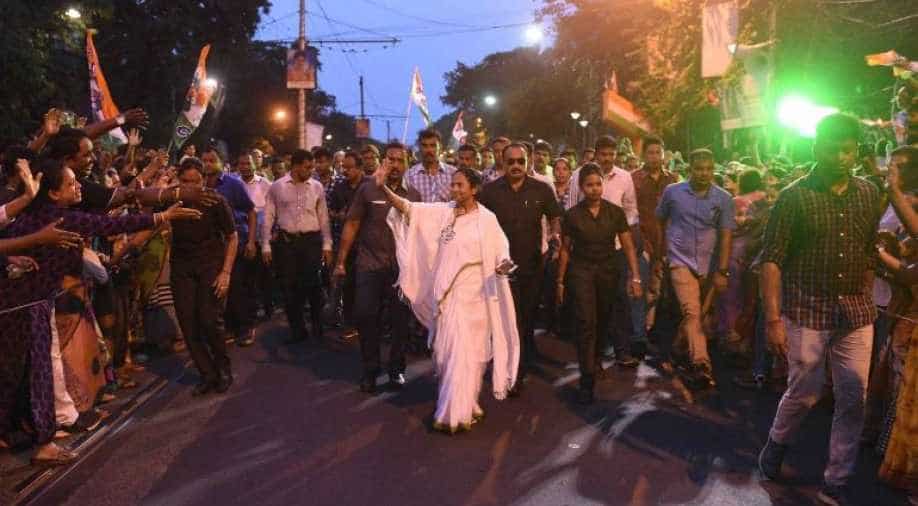 Earlier, addressing a meeting in the state PM Modi attacked the TMC and offered to build a grand statute of Vidyasagar.

The war of words over the vandalisation of the bust of Bengal Ishwar Chandra Vidyasagar escalated on Thursday with Chief Minister Mamata Banerjee calling Prime Minister Narendra Modi a liar and rejecting his offer to build a grand statue of the late social reformer.

She asserted that the West Bengal government had enough money to build it.

She also said that she has never come across a prime minister who kept saying so many lies. Banerjee took a jibe at the BJP which she said could not build a Ram Temple in the last five years and now was making the promise of building a new statue of Vidyasagar, which was vandalised in clashes during BJP president Amit Shah's roadshow in Kolkata earlier this week.

"In the last five years, you (Modi) could not build a Ram Temple and you want to make Vidyasagar's statue? People of Bengal won't beg before you. We have enough money to build it. Your goons came here and said 'Bengal kangal hai'. Are Bengalis kangal?" a vociferous TMC supremo said making a veiled reference to BJP President Amit Shah who had attacked Banerjee a couple of days.

Banerjee was addressing a public meeting while campaigning for her nephew and sitting MP Abhishek.

Earlier, addressing a meeting in the state Modi attacked the TMC and offered to build a grand statute of Vidyasagar.

Scoffing at BJP over the promise of making Vidyasagar's statue, Banerjee said, "BJP goons broke Vidyasagar's statue because they did not know him. He has contributed a lot to our society. You (BJP) broke the statue and you are saying we will make another one. Will the old heritage return or what? We do not need your money."

In an unprecedented action in India's electoral history, the EC on Wednesday invoked Article 324 of the Constitution to cut short the last phase of campaigning in West Bengal by a day after violence and clashes between BJP and TMC workers during Shah's roadshow in the state capital on Tuesday.

During the mayhem, Vidyasagar's bust was also vandalised at a college named after him. Since then, both TMC and BJP have been trading accusations against each other.

Vidyasagar, a renowned figure in West Bengal's history, devoted his life to women-centric reforms. He is also credited with bringing more order to the Bengali education system.

Asking the crowd to say 'Chowkidar Chor Hai' (guard is the thief), Banerjee said, "You have to bid him (Modi) goodbye. First, he called himself a 'chaiwala', now he claims himself to be a 'chowkidar'."

"Will you vote for this 'chowkidar'? We will take revenge for the vandalisation of Vidyasagar's statue. The people of Bengal will give you a befitting reply," she added.

Launching a scathing attack on Modi, the TMC supremo claimed that she never saw a "liar" occupying the top post.

"I have never heard any Prime Minister telling so many lies. How on earth did he become the Prime Minister? He does not have any idea how to run the country," Banerjee said.

She claimed that she had video evidence of BJP supporters disguising themselves as CRPF personnel and threatening the people to vote for the saffron party.

"I have video evidence of BJP supporters wearing CRPF uniforms. They go to the polling booths and threaten people to vote for BJP. They even said that they will change the EVMs in the middle of the night. But we will not keep quiet, we will fight," Banerjee said.

Snapping back at BJP over their claims that the state's democracy is under attack, the TMC supremo said, "Modi babu is so scared of Bengal. Just see, he is so scared of TMC."

Urging the people to vote in huge numbers to oust BJP, Banerjee asserted that the people of the country did not want the "dangerous" saffron party in power "anymore."

"On May 23, we will throw you out. You are here for just a few days only. Vote for TMC and defeat BJP. We do not want any more atrocities. The more quickly you will go, the better it would be," she said.

Elections to 33 seats have taken place in West Bengal in the first six phases of elections. The remaining nine seats will go to polls on May 19 in the last round with the counting set to take place on May 23.