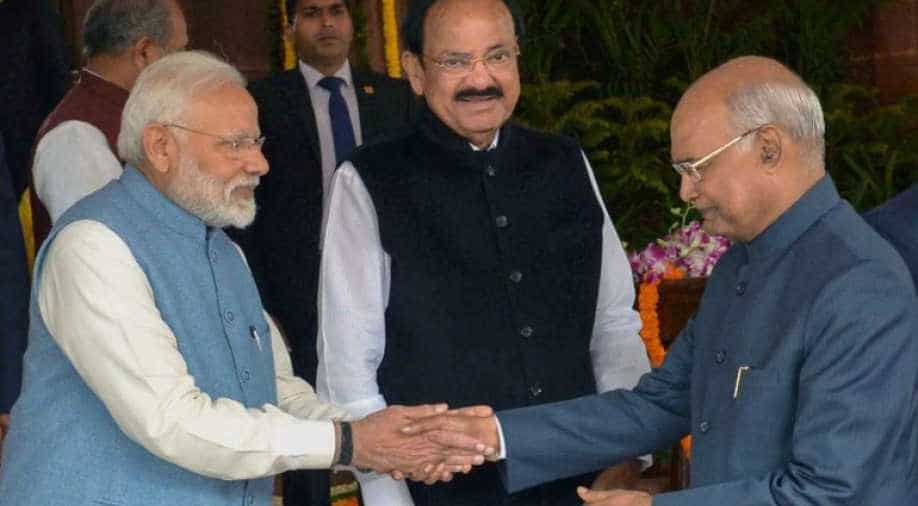 The government has been working to fulfil hopes and aspirations of all sections of people, he said.

India was going through "uncertain times" ahead of the 2014 Lok Sabha polls and the Narendra Modi government after assuming power resolved to work towards a 'New India', giving hope to the people, President Ram Nath Kovind said Thursday.

Addressing the joint session of Parliament at the beginning of the Budget Session, he said the NDA government has been trying to pass the triple talaq bill to empower Muslim women so that they can live a life without fear.

In pics: Nine landmark budgets and their impact on the Republic of India

The government has been working to fulfil hopes and aspirations of all sections of people, he said.

President: Compromising with security needs is not in interest of present & future of country. New deals in last year, purchase of defence equipment raised morale of defence. After decades, Indian Air Force will use ultramodern Rafale aircraft in coming months&strengthen itself. pic.twitter.com/UvETm6GcEJ

"The country was going through times of uncertainty before the 2014 Lok Sabha elections, and after the polls, my government resolved to make a New India," the president said.

Highlighting the government's achievements and various welfare schemes, Kovind said 21 crore poor people were covered under the PM's life insurance scheme, while over 2 crore households got power connection as part of the PM's Saubhagya scheme.

"Under Swachh Bharat initiative, the government has built nine crore toilets," he said.

The president also described 2019 as a significant year for democracy as the country is observing the 150th birth anniversary of Mahatma Gandhi.
Be it cities or villages, the government has worked towards strengthening the healthcare infrastructure, he said.