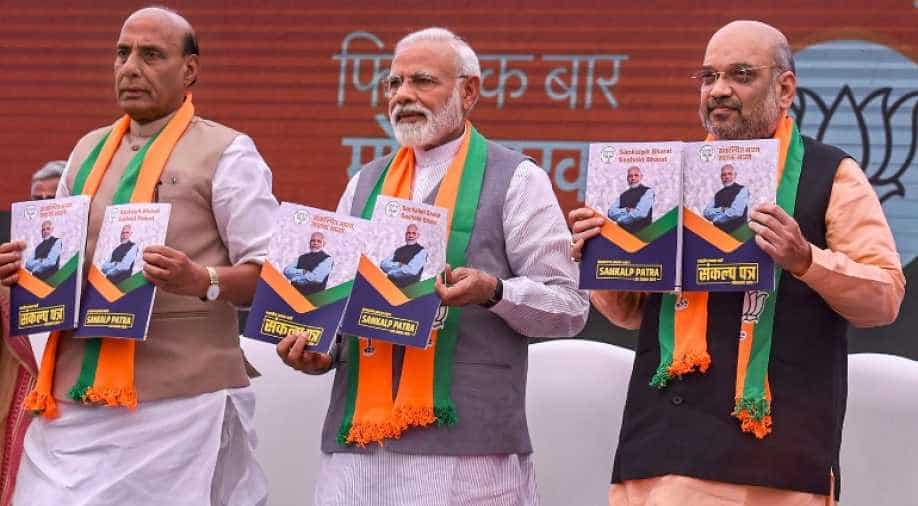 CCIT was proposed by India in 1996 but still languishes at United Nation due to lack of consensus to have a common definition on terror.

The BJP manifesto released on Monday said that if the party is elected back to form the government, it will take steps to isolate countries supporting terror and strengthen ties with groupings such as Russia-India-China (RIC) and Japan-America-India(JAI).

On the issue of terror, the BJP manifesto said,"we are committed to take concrete steps on international forums against countries & supporting terrorism" and will take necessary measures to "isolate such countries" on the global stage.

In the aftermath of Uri, Pathankot and Pulwama terror attacks, India has been focusing on isolating Pakistan which has been supporting terror groups like Jaish-e-Mohammad(JeM) responsible for these terror attacks.

It proposed the establishment of a "committee of nations against international terrorism" which will be voluntary multilateral forum based on CCIT or Comprehensive Convention on International Terrorism which calls for a common definition of terrorism.

CCIT was proposed by India in 1996 but still languishes at United Nation due to lack of consensus to have a common definition on terror.

The manifesto said, if it forms the next government, it will pursue co-operation against global evils like "terror & corruption" through  UN, G20, SCO, BRICS and Commonwealth.

Remember PM Modi has been raising the issue of terror and corruption at global forums. At the G20 summits in Argentina (2018), Germany(2017), Australia (2014), he gave agendas to counter corruption and terror.

The focus will be on boosting ties with groupings like RIC (Russia-India-China) and JAI (Japan-America-India), it said.

Last year on the sidelines of G20 summit in Argentina, RIC under Russian President Vladimir Putin, Indian PM Modi and Chinese President Xi Jinping had met after a gap of 12 years and JAI under PM Modi, US President Donald Trump and Japanese PM Shinzo Abe had met for the first time.

BIMSTEC has become India's premier forum for regional cooperation. SAARC is on a standstill after India along with Bangladesh, Bhutan, Afghanistan, Sri Lanka and the Maldives boycotted the 19th SAARC summit in Islamabad in the aftermath of the 2016 Uri terror attack perpetrated by Pakistan-based United Nations listed terror organisation - JeM.

Indo-Pacific also found mention in the manifesto, the party said it will be "pursued vigorously" along with Act East and cooperation with ASEAN.

Under the Modi government, India had launched the South Asia satellite to benefit the regional countries such as Nepal, Bangaldesh, Maldives, Bhutan, Afghanistan and Sri Lanka.