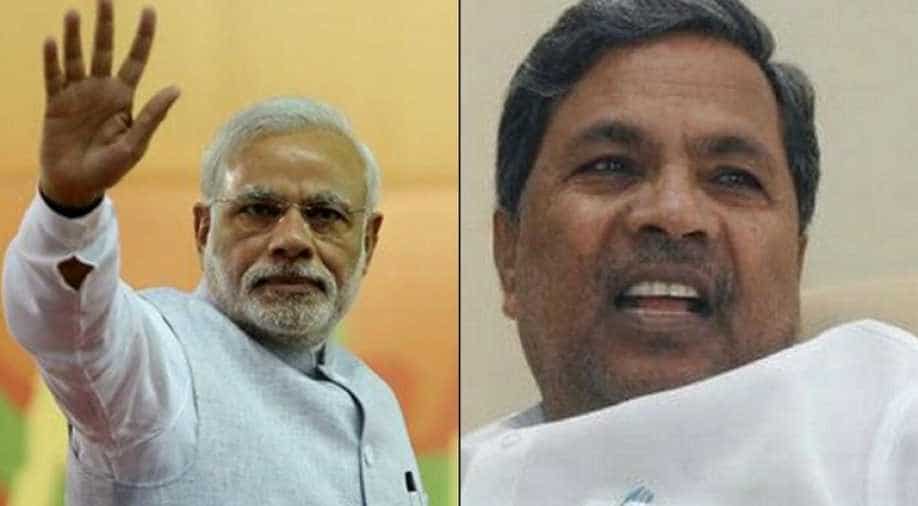 Sir, we have always championed the 3 Ps of democracy --- 'Of the People, By the People, For the People'," Siddaramaiah said in a tweet shortly after Modi's attack.

All guns blazing, Modi today mounted a scathing attack on the Congress over corruption, and asserted it will become "Punjab, Puducherry, Parivar" Congress after its defeat in the Karnataka Assembly polls.

"After May 15 (when poll results will be declared), Indian National Congress will be reduced to 'PPP Congress'-- P for Punjab, P for Puducherry, and P for Parivar (family)," Modi told an election rally in Gadag, where he predicted the state's ruling party would be decimated in the elections.

The Chief Minister also hit out at Modi's attack regarding the increase in assets belonging to some Congress legislator/Minister.

"Sir, Your CM candidate took bribe in a cheque. One of your Reddy friends G Janardhana Reddy conducted Rs 500 Cr wedding for his daughter at the height of demonetisation....," Siddaramaiah tweeted.

Modi today addressed four rallies in Tumakuru, Gadag, Shivamogga and Mangaluru in poll-bound Karnataka, where assembly election is scheduled for May 12.

Siddaramaiah asked Modi to talk about "something relevant" to the people of Karnataka and suggested topics such as expensive diesel and petrol besides job creation.

PM: What is the way to Karnataka Assembly?
Chanakya: Go straight on BSY Road. Drop BSY at Varuna. Turn Right at Deve Gowda circle. Then make a U Turn & drop Deve Gowda. Rest at Cariappa circle. No it Is Thimmaiah circle. Then make another U Turn ..
PM: Karnatak is very confusing! https://t.co/0BZYBOnnjR