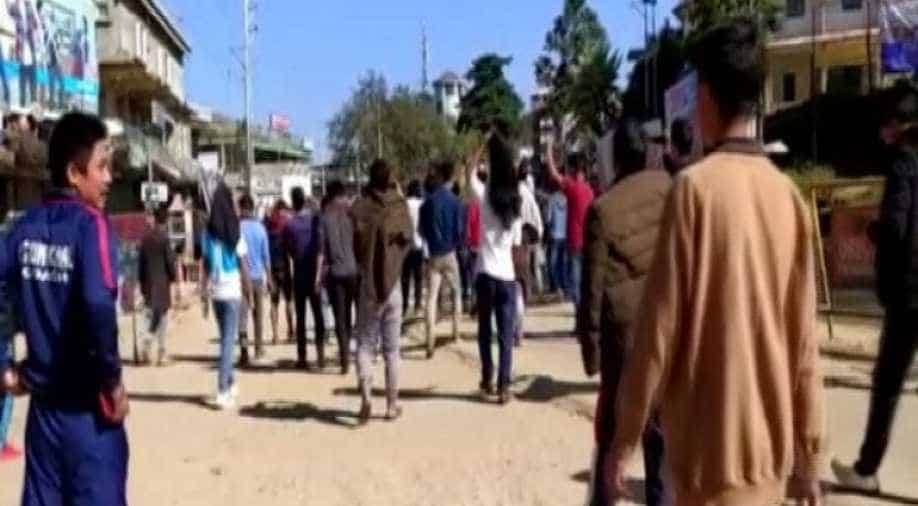 Visuals of protest in Naharlagun over Citizenship (Amendment) Bill, 2019 on Tuesday. Photograph:( ANI )

Arunachal Pradesh, Mizoram, Nagaland, Manipur, and Meghalaya are exempted from the Citizenship Bill, however, massive protests are going on in these states against the central government over the Bill

The All Arunachal Pradesh Students' Union (AAPSU) on Tuesday announced an 11-hour statewide bandh in support of the North East Students' Organisation's (NESO) decision to shut down the entire Northeast region, except Nagaland, to protest against the Citizenship (Amendment) Bill (CAB), 2019.

"The shutdown is for the cause of the Northeast's indigenous people and the greater interest of the region. We appeal to every individual to support the NESO and the AAPSU movement. The BJP government at the Centre passed the Bill despite strong opposition from the northeastern states," he added.

Asserting that AAPSU will stand with NESO, Taku said, "Although Union Home Minister Amit Shah has assured that the CAB would not be applicable to Inner Line Permit (ILP) regime states like Arunachal, Mizoram, and Nagaland, AAPSU's stance on the matter is very clear and it will stand with NESO and its decision."

Arunachal Pradesh, Mizoram, Nagaland, Manipur, and Meghalaya are exempted from the Citizenship (Amendment) Bill, however, massive protests are going on in these states against the central government over the Bill.

The Citizenship (Amendment) Bill, which seeks to give citizenship to refugees from the Hindu, Christian, Sikh, Buddhist and Zorastrian communities fleeing religious persecution from Pakistan, Afghanistan, and Bangladesh, was passed in Lok Sabha on Monday.

However, according to sources, the Bill will be tabled in Rajya Sabha on Wednesday.