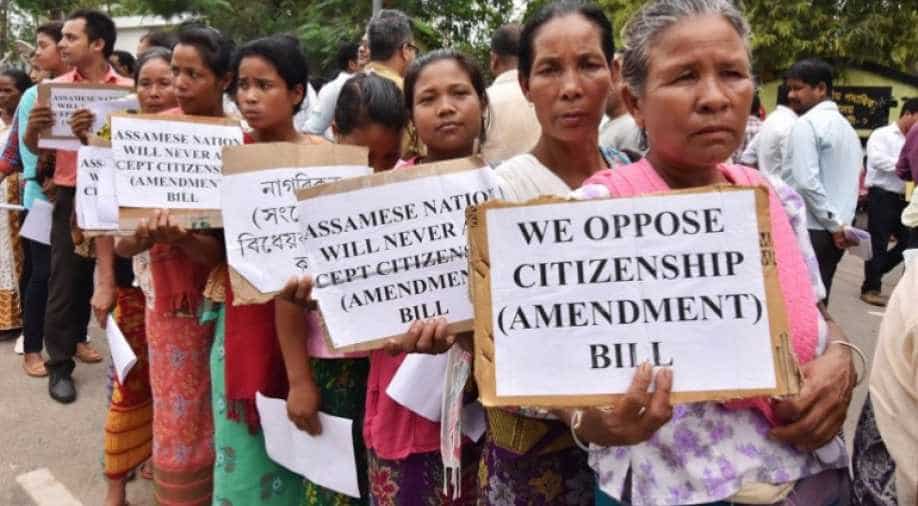 In the neighbouring Assam, the North East Students Organisation (NESO) observed a 'black day' to protest the firing incident in Tripura.

Firing and lathi-charge by security forces to quell protests against the Citizenship (Amendment) Bill, 2016 in West Tripura district earlier this week triggered 'bandh' in large parts of the northeastern state Saturday.

Agitators in neighbouring Assam and Mizoram too joined the stir against the bill that aims to provide citizenship to illegal migrants of Hindu, Sikh, Buddhist, Jain, Parsi or Christian extraction from Afghanistan, Bangladesh and Pakistan.

On Tuesday, the day the bill was passed in Lok Sabha, seven people were injured in Madhabbari area of the district when police and the paramilitary forces resorted to lathi-charge and fired in the air to disperse protesters.

Normal life was crippled during the dawn-to-dusk bandh on Saturday in Tripura Tribal Areas Autonomous District Council (TTAADC), which comprises two-thirds of Tripura's territory and is home to tribals who constitute a third of the state's population.

Sunil Dev Debbarma, general secretary of Tripura Students Federation, said the seven injured in the lathi charge are admitted to a hospital but said to be stable.

Khumulwng town, the headquarters of the tribal council around 18km from Agartala, remained deserted as shops were closed and markets were closed and vehicles stayed off roads. Schools, colleges and government offices also remained shut, police said.

There was no report of any violence from any part of the council during the bandh, said Subrata Chakraborty, the state additional inspector general (law and order).

The officer said there was no road blockade or demonstration near Khumulwng town and adjacent areas.

The ban on Internet services and prohibitory orders under Section 144 of the Code of Criminal Procedure have been lifted, Singh said.

Tripura Chief Minister Biplab Kumar Deb has ordered a magisterial inquiry into how and under what circumstances police opened fire on protesters in Madhabbari.

A motorbike rally with participants carrying black flags was organised in Barkathal in West Tripura district, he said.

In the neighbouring Assam, the North East Students Organisation (NESO) observed a 'black day' to protest the firing incident in Tripura.

The All Assam Students Union, a constituent of NESO, hoisted a black flag at its headquarters in Guwahati and student activists protested across the state.

AASU chief advisor Samujjal Bhattacharya, who had gone to Tripura with a team of NESO members, said they were stopped by police when they were proceeding towards Khumulwung Hospital to visit the injured persons after meeting other injured people at G B Pant Hospital.

He alleged that the Tripura Chief Minister Deb does not understand the pain of the indigenous people.

"We condemn the high-handed attitude of BJP government in Tripura and protest against it by observing today as 'black day', he added.

In Mizoram, the Mizo Zirlai Pawl or Mizo student federation, a constituent of NESO, had called for protests.

Black flags were hoisted at several places in the state capital Aizawl by MZP activists.