Anti-social, Leftist and Maoist elements trying to take control of farmers' agitation, says Govt; protesters in no mood to budge 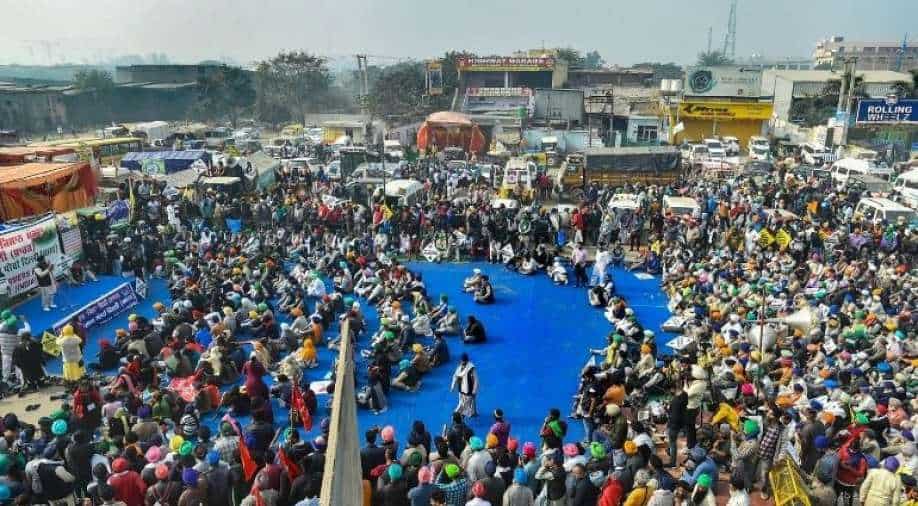 Food, Railway and Consumer Affairs Minister Piyush Goyal was more direct in his charge, alleging that certain Leftist and Maoist elements seem to have taken 'control' of the agitation

The government on Friday asked protesting farmers to be vigilant against their platform being misused, saying some "anti-social" as well as "Leftist and Maoist" elements are conspiring to spoil the atmosphere of the agitation even as the protesters stuck to their demands.

Photographs of some protesters at the Tikri border seen holding posters demanding release of activists arrested under various charges had gone viral, prompting Agriculture Minister Narendra Singh Tomar to say that these "anti-social elements" are conspiring to spoil the atmosphere of the peasants' movement under the guise of farmers.

He also said the government is sensitive towards farmers and is in discussion with them and their representatives to resolve their concerns.

"A proposal to resolve the farmers' objection has also been sent to the farmers union and the government is ready for further discussion," Tomar tweeted.

Food, Railway and Consumer Affairs Minister Piyush Goyal was more direct in his charge, alleging that certain Leftist and Maoist elements seem to have taken "control" of the agitation and rather than discussing on farmer issues, they seem to be having some other agenda.

In a tweet, he said, "People of India are watching, seeing what is happening, observing how across the country Leftist-Maoists are not finding any support & therefore they are trying to hijack this farmers agitation & trying misuse this platform for their own agenda."

Farmer leaders had on Thursday insisted that their ongoing protest against the Centre's new farm laws was "apolitical".

Meanwhile, Bharatiya Kisan Union leader Rakesh Tikait on Friday asserted that anything less than scrapping of the new agri laws won't be accepted and if the government wants to talk, farmer leaders should be formally conveyed like in previous occasions.

The government had asked farmer groups to consider its proposals for amending the Acts to address their concerns and said it was open to discussing its offer further whenever the unions want.

"They (government) should first tell us when and where they want to meet us as they did for previous formal talks. If they invite us for talks, we will discuss that with our coordination committee and then take a decision," Tikait told PTI.

The BKU leader said there was no question of returning home until the government repeals the three laws.

Asked whether the government has sent any invite for further discussion, he said the farmer unions have not received anything as such.

"One thing is very clear that farmers will not accept anything less than scrapping of new agriculture laws," he said.

Farmers leaders on Thursday announced they would block railway tracks across the country if their demands were not met by the government and would announce a date for that soon.

At least five rounds of formal talks have taken place between the Centre and representatives of farmers, mainly from Punjab and Haryana, protesting on various borders of the national capital for about two weeks, but the deadlock has continued with the unions sticking to their main demand for the repeal of the three contentious laws.

The sixth round of talks between the government and farm union leaders, which was scheduled for Wednesday morning, was cancelled.