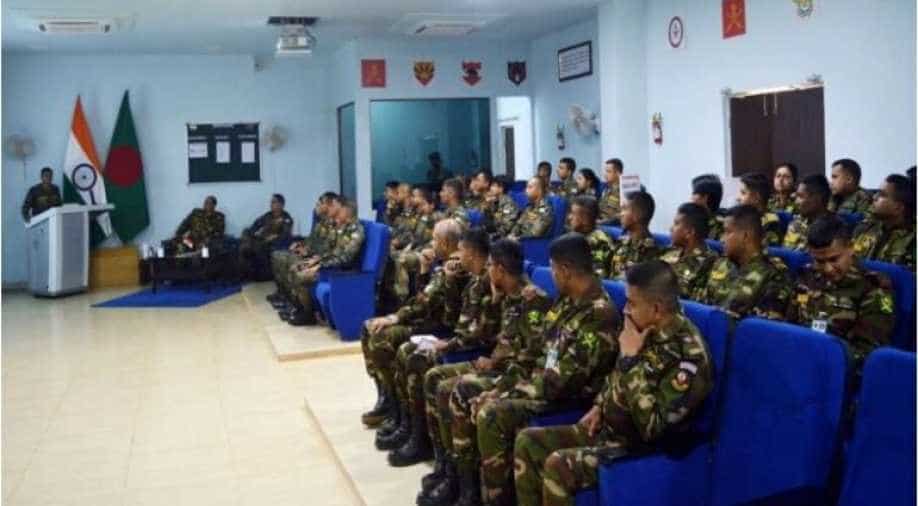 Each side comprises 128 jawans, 12 officers and 10 junior commission officers (JCOs).

The training commenced on Monday and its main focus is counter-terrorism on difficult terrains like mountains and jungles.

Command Post Exercise (CPX) and Field Training Exercise (FTX) will be conducted in the 14-days training schedule. For both the CPX and FTX, a scenario where both the nations are working together in a counter-terrorism environment will be simulated under the United Nations charter.

The Bangladesh Army's contingent is under the command of Commander Md. Shafiul Azam. The contingent is Bangladesh's 42nd infantry regiment. Indian Army's Bihar regiment will take part in the training, the regiment is led by Brigadier Rajesh Sharma.

Each side comprises 128 jawans, 12 officers and 10 junior commission officers (JCOs).

The FTX training's curriculum is steadily planned where the participants will initially get familiar with each other's organisational structure and tactical drills.

Subsequently, joint tactical exercise will be conducted wherein the battle drills of both Indian and Bangladeshi armies will be practised.

The training will end with a final validation activity in which troops of both armies will jointly practice a counter-terrorist operation in a controlled and simulated environment.

In addition, to understand each other at a tactical level, greater cultural understanding will be emphasised to increase military trust and partnership between the two countries.

This exercise will conclude on February 16.