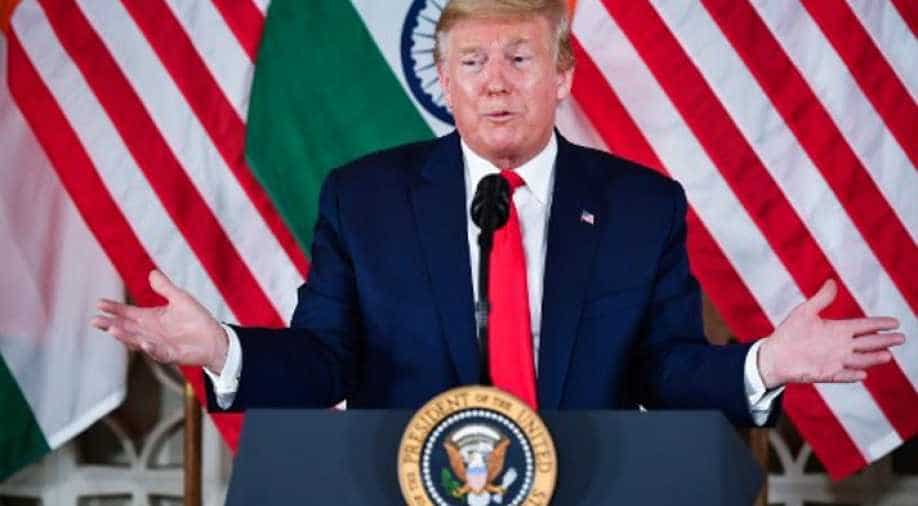 US President Donald Trump said today that during his discussion with PM Modi he spoke about the importance of a "secure" 5G wireless network and the need for "emerging technology to be a tool of freedom, progress and prosperity" as he took a veiled dig at China on the Huawei issue without openly stating it.

"Must ensure not to do anything where it can be even conceived as a conduit of suppression and censorship," the US president said, adding," to guarantee that the infrastructure of the future is safe, transparent and accountable."

Also Read: We want countries to be happy and healthy, says Trump on coronavirus outbreak

"The United States is working with a range of partners including Australia and Japan to create a blue dot network to ensure countries around the world to have access to trustworthy options for high-quality infrastructure development."

The Trump administration has been openly canvassing against China's Huawei even as PM Johnson's UK government allowed the Chinese tech giant to operate its 5G network in a "restricted role" in the country. The European Union too agreed to allow Huawei to operate although it left it to member states to ensure responsibility to ensure the safe rollout of 5G as it warned them to screen operators carefully, saying security of the network will be critically important for the entire EU.

In Pics: Trump gets guard of honour and visits Raj Ghat

US Secretary of State Mike Pompeo had later urged the United Kingdom to relook the implementation of the 5G network.

Washington has often reiterated that Huawei is an extension of the Chinese state and that it helps Chinese intelligence to steal secrets - an allegation denied by the company. The Trump administration has stated that it would be difficult for allies to share secret information with it if it allows the Chinese 5G network to operate. Both Huawei and China have consistently denied it has anything to do with stealing secrets or ever engaged in espionage.

In December, Germany's Telefonica Deutschland had picked  Nokia of Finland and China's Huawei on Wednesday to build its 5G network amid heated debate in Germany over whether to heed US warnings that Huawei poses such a security threat.