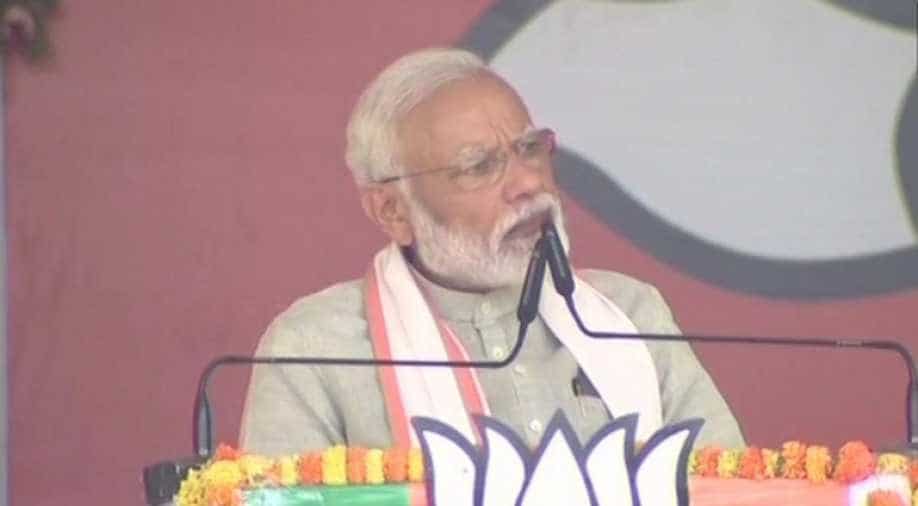 Hitting out at BSP chief Mayawati for her remarks on the Alwar gangrape case, the prime minister asked her “not to shed crocodile tears” for the victim.

As campaigning for the Lok Sabha polls entered its final phase, Prime Minister Narendra Modi Sunday predicted the defeat of the opposition parties, saying the people were voting for an effective government.

“Opposition parties will fall flat in Lok Sabha polls. This is because people are voting for an effective and honest government,” he said at an election rally here.

Attacking the SP-BSP alliance, Modi said he had been the chief minister of Gujarat more than the terms of Akhilesh Yadav and Mayawati as Uttar Pradesh chief ministers combined, and there was no blot of corruption on him.

Hitting out at BSP chief Mayawati for her remarks on the Alwar gangrape case, the prime minister asked her “not to shed crocodile tears” for the victim.

“If you are serious, why don’t you withdraw support from the Congress government in Rajasthan,” he asked.

Even the Congress government wanted to suppress the incident involving a Dalit woman, he said, adding that the party thought “hua toh hua”, a reference to Sam Pitroda’s remark on 1984 anti-Sikh riots.

Referring to the encounter in Shopian district of Jammu and Kashmir Sunday morning, the prime minister wondered, “Will our jawans take EC’s permission before opening fire at militants? Opposition kya khel bana rakha hai? (What drama is the opposition enacting).” He said it was surprising to note that the opposition parties were saying that elections were on and the security forces were opening fire at militants.