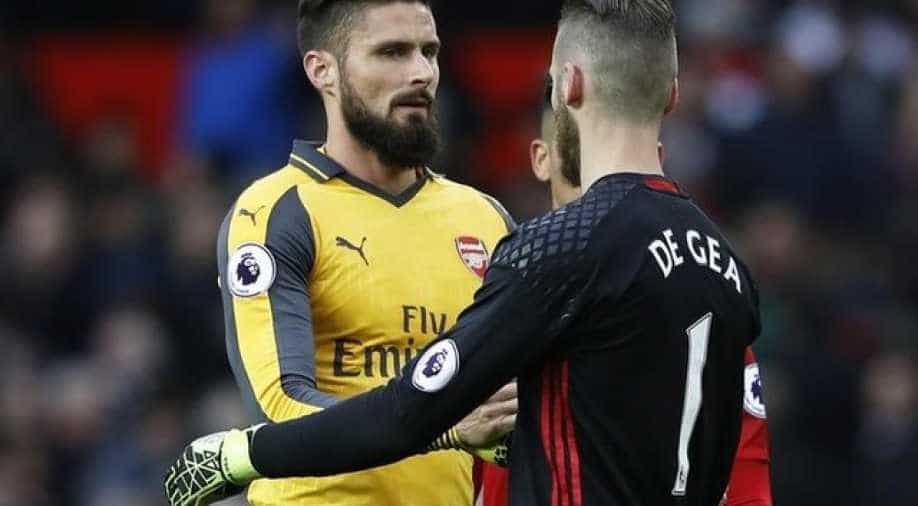 Olivier Giroud headed home an 89th-minute equaliser to earn Arsenal a 1-1 draw at Manchester United on Saturday and a Premier League point their performance barely merited.

Just when it seemed Jose Mourinho would again prevail in his long-standing feud with Arsene Wenger thanks to a second-half Juan Mata goal, Giroud popped up to head home fellow substitute Alex Oxlade-Chamberlain's cross in the rarest of Arsenal attacks.

Injury-hit United had largely dominated proceedings and looked set to bring relief to Mourinho after an inconsistent start to the season when Mata struck in the 68th minute, finishing sweetly from Ander Herrera's cut-back.

But in a game that never reached the peaks of the fixture that was once the league's defining contest, there was little consolation for Mourinho in improving his unbeaten league record against Wenger to 12 as Arsenal stretched their unbeaten run in all competitions to 17.

The match had begun in lively enough fashion, with Alexis Sanchez heading wide at one end and Mata sending a free kick just wide at the other.

Yet it developed into a dull affair until Mourinho finally got animated, screaming for a penalty when Antonio Valencia appeared to be brought down in the box by Nacho Monreal.

Both Mata and Anthony Martial brought fine saves from Petr Cech as United turned up the heat before the interval but, in the main, they were lacking any sort of cutting edge in the absence of the suspended Zlatan Ibrahimovic.

Wayne Rooney was brought on as a substitute at the end of a week when he had been forced to apologise for his late night socialising on England duty and his introduction livened up United before Mata, the midfielder sold by Mourinho when at Chelsea, broke the deadlock.

Wenger has never had much luck against Mourinho but his substitutions did the trick with Oxlade-Chamberlain causing havoc down the right, floating in a fine cross and watching Giroud head home his 10th goal for Arsenal as a "super sub".

The great escape for the Gunners meant that, even though they were unable to take their chance to go to the top of the table, they retained their six-point advantage over United.