Before Chris Rock, Will Smith once slapped a reporter on the red carpet, here's why 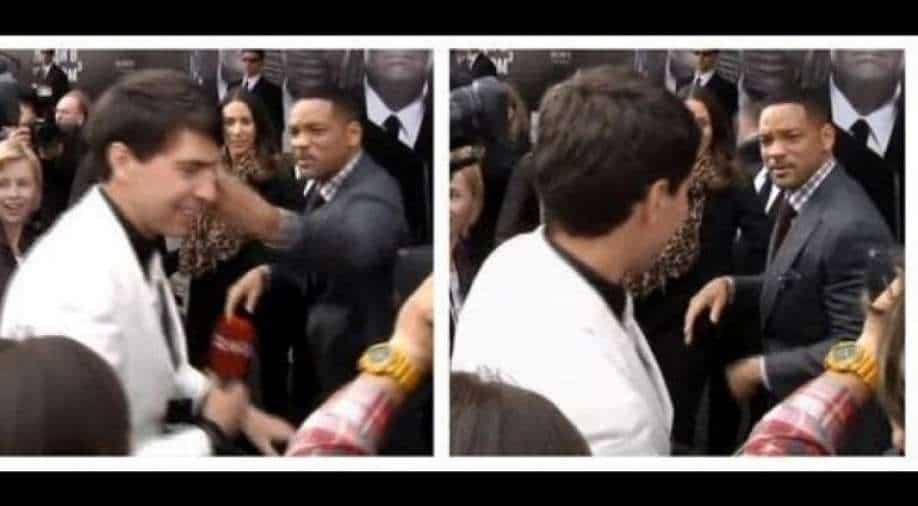 Before Chris Rock, Will Smith once slapped a prankster Photograph:( Twitter )

The video which is doing rounds on social media shows Will Smith talking to the reporters when a Ukrainian jokester, who was posing as a reporter, tries to kiss Smith.

The Oscars 2022 ceremony was going well until Will Smith took the stage and smacked Chris Rock across the face. Since then, Smith and his slap have become the talk of the world.

But, did you know this was definitely not his first slap in public or at an award function, yes! Smith, a decade ago slapped a man in the face on the red carpet for 'Men in Black III'.

Back then, he raised a hand at the Ukrainian jokester Vitalii Sediuk, who was posing as a reporter and tried to kiss him on the cheek.

The video which is doing rounds on social media shows Smith talking to the reporters when Vitalii was posing as a reporter, tries to kiss Smith. In response, a furious Will pulled away from the man slapped him with the back of his left hand.

Seduik is known for his famous prank that he had done with celebrities. His pranks include rushing the stage at the 2013 Grammys when Adele was receiving his award, he once grabbed Bradley Cooper around the legs at the Screen Actors Guild Awards, and many others.

Meanwhile, we got one of the most shocking moments in Oscar's history after Chris took the stage to present an Oscar for ‘Best Documentary Feature’ and made a movie ‘G.I. Jane’s' joke about Jada Pinkett Smith’s shaved head.

Smith, in a post on Instagram, said his behaviour at the globally televised ceremony was "unacceptable and inexcusable."

"I would like to publicly apologize to you, Chris," Smith wrote. "I was out of line and I was wrong."

What is Alopecia Areata? The disorder that Will Smith's wife Jada suffers from

''Violence in all of its forms is poisonous and destructive. My behaviour at last night’s Academy Awards was unacceptable and inexcusable. Jokes at my expense are a part of the job, but a joke about Jada’s medical condition was too much for me to bear and I reacted emotionally.

I would like to publicly apologize to you, Chris. I was out of line and I was wrong. I am embarrassed and my actions were not indicative of the man I want to be. There is no place for violence in a world of love and kindness,'' he said in a statement.