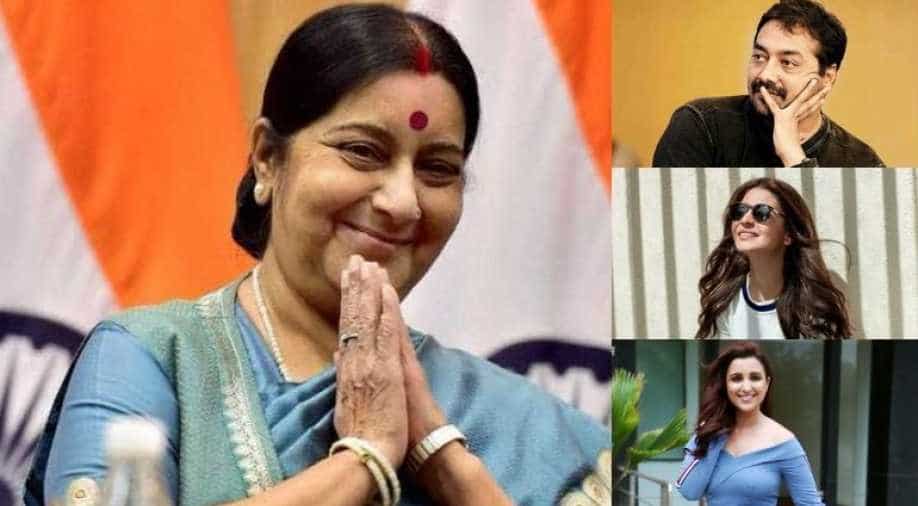 Bollywood mourned the death of one of the country's most loved minister Sushma Swaraj. Photograph:( Twitter )

Several of Bollywood stars took to Twitter to give the late minister emotional and heartfelt tributes.

Former External Affairs Minister and one of the most loved Parliamentarians in the country Sushma Swaraj breathed her last on Tuesday night.

Swaraj suffered a cardiac arrest. She was administered CPR but did not respond, according to the All India Institute of Medical Sciences.

As the news of her death trickled in late on Tuesday night, many prominent BJP leaders and Union Ministers rushed to Swaraj's residence to pay their condolence.

Several of Bollywood stars took to Twitter to give the late minister emotional and heartfelt tributes.

I hail from Ambala Cantt, same as Sushma Swaraj ji. Always felt proud that a woman from our small town made it big, and made a difference. Sushma ji rest in peace. You inspired me on a personal level. #RIPSushmaSwarajJi

Saddened to hear about the sudden demise of Sushma Swaraj ji . May her soul rest in peace 🙏

India has lost its extraordinary leader, minister and personality.. May God bless her soul 🙏 #SushmaSwaraj

Rest in peace @SushmaSwaraj ji. You were the most amazing parliamentarian and the minister and always there for your constituents . I will miss you and am sure we all will miss you .

Shocked to hear the sudden demise of @SushmaSwaraj ji. She was a gracious lady & astute parliamentarian. Did a excellent job as the External Affairs Minister. My heartfelt condolences to her family members. #OmShanti 🙏 pic.twitter.com/m5k8Hed6v3

#SushmaSwaraj ji, may your soul rest in peace. 🙏🏻

Deeply saddened...#SushmaSwaraj ji is and will always be remembered as one of the most respected and beloved leaders of our country. Her speeches in parliament, her empathy, her spirit, her kindness... what a remarkable and amazing human being. #RIPSushmaSwarajJi pic.twitter.com/kADsCOq6j8

RIP #SushmaSwaraj ji. May her soul rest in peace

An Iron Lady who was not only a true patriot but an incredible inspiration for each and every one of us. An epitome of women empowerment and leadership.#SushmaSwaraj ji you will be missed and remembered forever. My deepest condolences and prayers to the family 🙏#RIPSushmaJi pic.twitter.com/OLrXJMuf0X

Waking up to an extremely sad news..I am shocked and saddened. #SushmaSwaraj ji was an someone who not only went out of her way to help people in her capacity as an official,but more so as a lovely human she was..with her gone so soon,India has lost a beautiful soul #RIPSushmaJi

RIP Sushma ji. Absolutely shocked and devastated to hear about her passing. She was always close to me and was extremely kind, since the early days. My heartfelt condolences to the family & our entire nation for this great loss.

#RIPSushmaSwarajJi ... such a strong and prominent face of women in Indian politics... what a huge loss to our nation ... my condolences to the family and to an entire nation that mourns ... #respect #womanofstrength #RIP

I’m deeply saddened at the untimely demise of #SushmaSwaraj ji She will always be remembered as one of the most respected and beloved leaders of our country. #RIPSushmaSwarajJi

RIP #SushmaSwaraj ji.. one great leader who proved that you could could be hold the top position in a Ministry and still be hands on in solving issues of the common man real time.Your dedication to attending to all the Appeals meet you on social media is exemplary and legendary.

Deeply saddened to hear about the sudden demise of #SushmaSwaraj Ji. She was an extraordinary leader, minister & personality. #RIP Iron lady.

She was appointed as the minister of external affairs in 2014 when BJP won the general elections. She didn't contest the 2019 Lok Sabha polls on health ground.