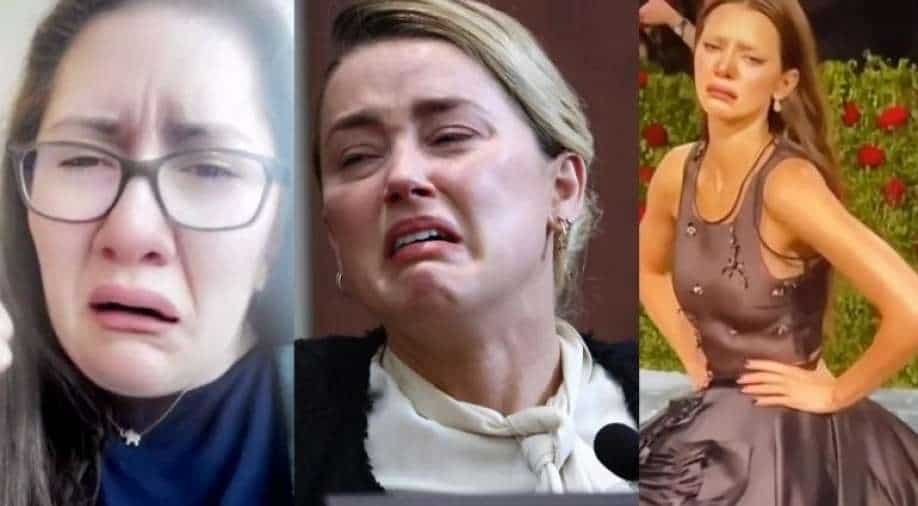 Before this, Amber was all over the internet as the netizens found out that her last name on IMDb has been changed from 'Heard' to 'Turd'

Is Snapchat making fun of Amber Heard? Or, the social media platform is on Johnny Depp's side? We don't know, netizens are asking all these questions on Snapchat and their new sad face filter. The entire world is embroiled in a long debate about Amber and her ex-husband Johnny Depp's married life and all the shocking and bizarre revelations that had been shared during the defamation case going on in Virginia.

Last week, Amber took the stand and broke down in tears as she talked about her married life with her ex-husband. Heavily sobbing, the 'Aquaman' actress shared how Depp physically assaulted her just after their marriage with a liquor bottle.

Amber's crying face quickly become the talk of the town and on the same day. coincidently, Snapchat dropped its new crying face filter led to the netizen's theory about the platform's new crying filter is inspired by Heard's viral crying face.

After days of rumours, Snap Chat reps have confirmed that the filter has no connection with Heard. During their chat with TMZ, they said that there’s “no truth” to the rumours and shared that the filter has been in the works for six months - so it started developing months before their testimony started.

Another told that they have previously shared the opposite filter of smiling face, so it's pretty much understandable that this one will come in future.

Doing drugs in flight to sexual assault: Bombshell revelations made by Amber Heard in court

Within a few hours of release, the filter quickly become viral and has so far garnered 1.3 billion reactions. Before Snap Chat clarification, hundreds of users used the filter and flooded social media with hilarious memes spreading the rumour about social media platforms making fun of the Heard's face.

"Is it just me or is the new snap chat filter making fun of Amber heard…" One Twitter user asked. “The Amber Heard filter is going hard, and they are killing me,” another wrote.

Check out netizens' reactions below:

The Amber Heard filter is going hard, and they are killing me🤣🤣

Is it just me or is the new snap chat filter making fun of Amber heard… pic.twitter.com/uCegE24l7E

Snapchat has really out done themselves with the Amber heard filter, sorry crying filter.

Before this, Amber was all over the internet as the netizens found out that her last name on IMDb has been changed from 'Heard' to 'Turd'. Read more here.

As the case continues in the Virginia court, they have become one of the most-searched names across the world. In the much-publicised case, Johnny Depp and Amber, both have made awry revelations about their troubled past, from finding human faeces on his side of the bed to Depp doing MDMA on the flight.