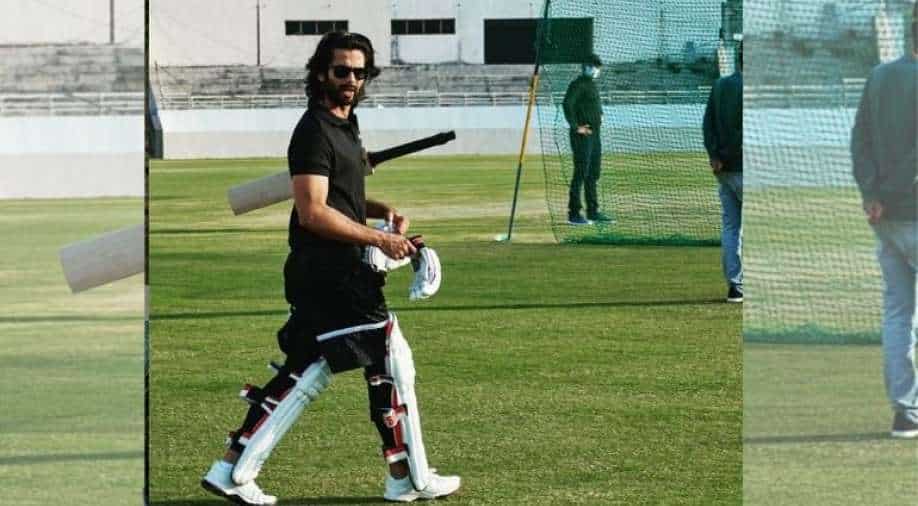 'Jersey' is a Hindi-remake of a Telugu film of the same name helmed by Gowtam Tinnanuri.

Prepping for his upcoming sports-drama 'Jersey', actor Shahid Kapoor on Saturday treated his fans to a stunning picture from the cricket field.

The 'Padmaavat' star posted a picture to Instagram, in which he is seen all set to bat in the field. In the snap, which seems to be of a cricket practising ground, Shahid is seen sporting an all-black attire while he wears protective gear on his legs. The actor seems to be ready to take the position of a batsman as he holds a bat underneath his shoulder while wearing his gloves. Kapoor looks handsome in the black ensemble with his new hairstyle, and full-grown beard while he wears chunky sunglasses.

In full power to hit the field, the 'Jab We Met' actor captioned the post as, "#jersey prep. . . De dhana dhan."

Celebrity followers including Kanika Kapoor and more than 95 thousand fans liked the post within the first 18 minutes of being posted.

'Jersey' is a Hindi-remake of a Telugu film of the same name helmed by Gowtam Tinnanuri. The Telugu version received an overwhelming response from the audience and critics alike.

After Vikas Bahl's 'Shaandaar', the sports drama would see father and veteran actor Pankaj Kapur and son Shahid sharing screen space together. Film 'Jersey' revolves around a father named Arjun (Nani), a talented but failed cricketer, who decides to return to cricket in his late thirties because of his desire to represent the Indian cricket team and fulfil his son's wish for an Indian jersey as a gift. How he makes it big despite being limited by his age forms the essence of the story.