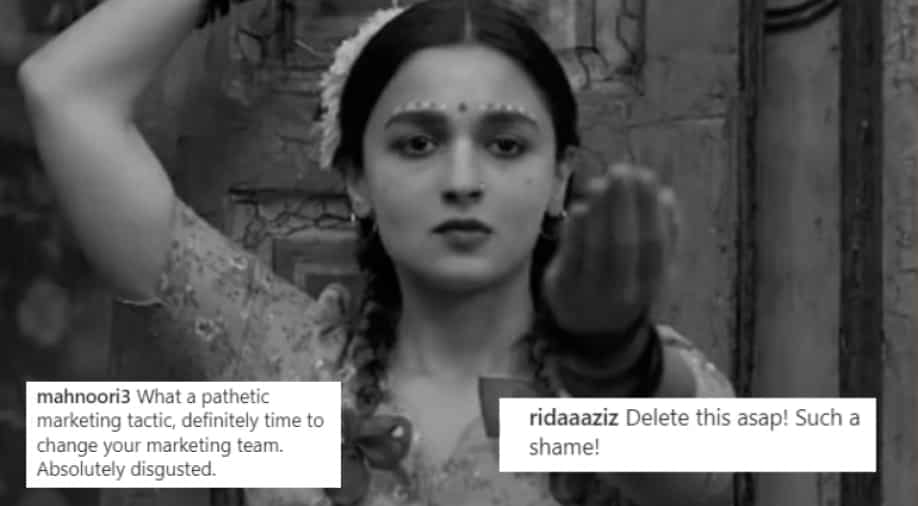 Sanjay Leela Bhansali's movie follows the story of one of the most powerful madams of Mumbai’s red-light area Kamathipura during the 1960s and Alia played the role of a mafia queen Gangubai.

This Pakistani restaurant is facing a huge backlash for the ad promotion in which they used a scene from 'Gangubai Kathiawadi' featuring Alia Bhatt. The scene which shows Alia was used to promoting a 25% discount offer for men on Monday at the restaurant.

Sanjay Leela Bhansali's movie is based on Hussain Zaidi’s book and follows the story of one of the most powerful madams of Mumbai’s red-light area Kamathipura during the 1960s and Alia played the role of a mafia queen Gangubai.

The particular scene used in the ad shows young Gangu who came to Mumbai to become a heroine, was sold off to a brothel by her boyfriend. After days of torture, Alia's character is forced by the head of the brothel to get her first client.

Using this heartbreaking scene for the promotion stirred up backlash online. Some called them misogynists, while others wrote, "You guys are using such a painful scene for your advertisement???''

A few hours after the restaurant was called out for its derogatory & offensive promotion, the eatery defended the post and wrote, ''Just a concept. We didn't mean to hurt the sentiments of anyone. The movie and this post is based on a concept. Like before, we're open to all and will be serving you with the same love as we always have. ♥️''

Sanjay Leela Bhansali's movie opened with a great response after the brief wave of pandemics and emerged as the biggest blockbuster of the post-pandemic. Whoever missed the film on the big screen can watch the movie on Netflix.

Koffee With Karan trailer: Karan Johar is back to do all the chit & chat