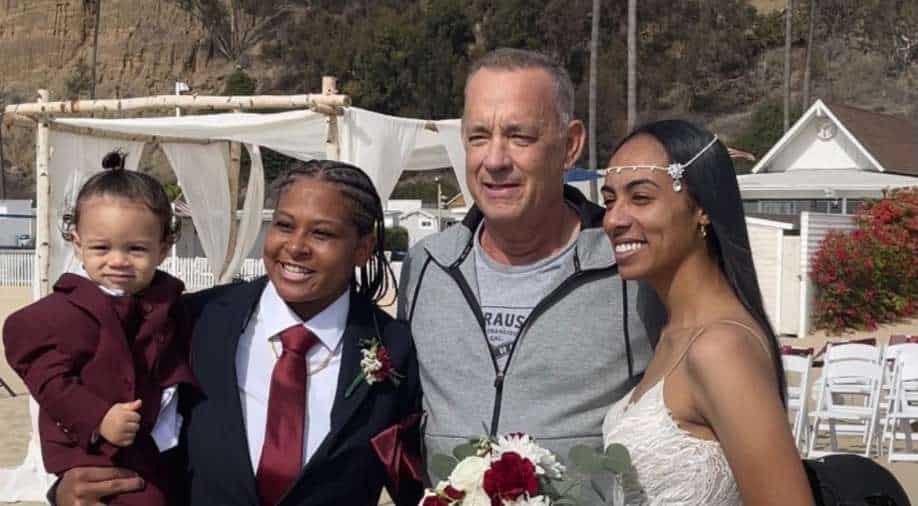 Tom Hanks with the couple he has surprised with his presence Photograph:( Twitter )

The newlyweds then told the media that the 'Sully' star walked up to them, saying he had been watching their wedding from a distance and complimented them for being a gorgeous couple.

A California pair was in for the biggest wedding surprise ever when an unexpected guest showed up to their beachside wedding.

According to reports, Diciembre and Tashia Farries were getting married on the beach in Santa Monica, California, over the weekend when the Oscar-winning actor crashed their wedding.

The newlyweds then told the media that the 'Sully' star walked up to them, saying he had been watching their wedding from a distance and complimented them for being a gorgeous couple.

If that wasn't sweet enough, Tom Hanks then requested a picture with Diciembre and Tashia and their 1-year-old son to mark the special occasion.

Diciembre later revealed that her late brother and Hanks share the same birthday. "It was like that was a message that he was there!" they told a news site, reportedly.

When #TomHanks crashes your wedding! The GREAT story @FOXLA today at 3 before the game! pic.twitter.com/FEwIF7dGX9

This isn't the first time Tom Hanks has crashed a wedding. In 2016, Hanks chanced upon a wedding ceremony while jogging in New York City's Central Park and the couple had invited him to pose for their wedding pictures. he happily obliged.

"Elizabeth and Ryan! Congrats and blessings! Hanx," Tom Hanks had written on Instagram.