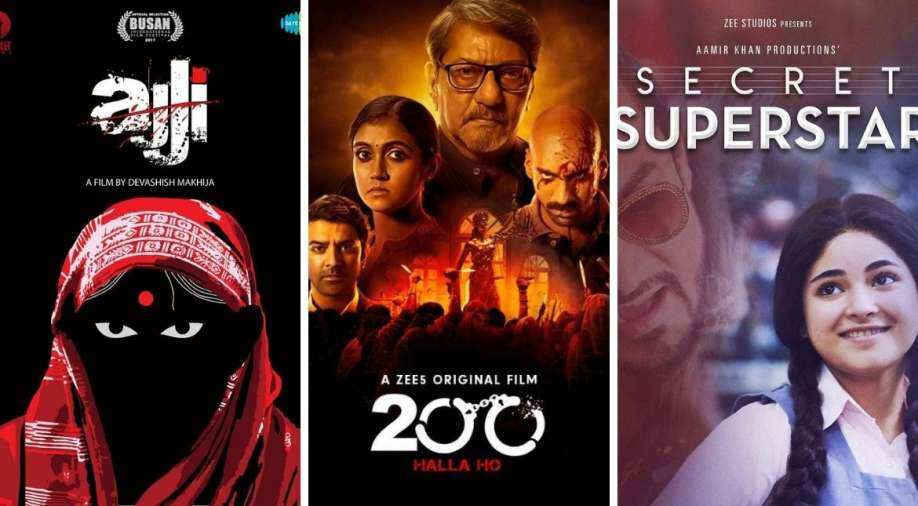 Movies like '200 Halla Ho', 'Ajji', 'Dear Zindagi', 'Article 15', 'Secret Superstar' and 'Highway' take you into the heart of the darkness that young girls battle routinely.

Movies like '200 Halla Ho', 'Ajji', 'Dear Zindagi', 'Article 15', 'Secret Superstar' and 'Highway' take you into the heart of the darkness that young girls battle routinely.

Dear Zindagi: This 2016 film subtly depicted how parental discrimination and insensitivity towards girl children can have a lasting impact on their mental health even as adults. The film slowly unravels the many insecurities and trigger points within Kaira, an ambitious cinematographer who cannot manage her emotional life has deep-rooted anger against her parents, and also insomnia.  This Gauri Shinde film boldly spoke of mental health issues that are usually swept under the rug in families and the way daughters are gaslighted or castigated for displaying their hurt, anger or pain. The film starred Alia Bhatt, with Ira Dubey, Kunal Kapoor, Angad Bedi, Ali Zafar, Yashaswini Dayama, and Rohit Suresh Saraf in supporting roles. And of course Shah Rukh Khan as Dr.Jehangir Khan who helps Kaira to come to terms with her past and look forward to her future.

200 Halla Ho: Where does systematic violence spring from? Does it stem from social and economic disparity, caste lines, and a flawed justice system? Yoodlee's 200 Halla Ho tries to answer these questions by addressing a subject that is largely overlooked in mainstream cinema; sexual violence against Dalit women. Inspired by true events, the film then shows us the other side of systemic oppression, which is inevitably a reaction fuelled by rage and unrelenting humiliation. The film shows how young women and girls, when born on the margins of society at times, have to fight for their dignity in the absence of any social or legal system that guarantees their safety.  The film stars Amol Palekar, Rinku Rajguru, Barun Sobti, Sahil Khattar, Saloni Batra, Upendra Limaye, Indraneil Sengupta, and Flora Saini

Ajji : Sexual violence against the girl child is symptomatic of a society that has lost its moral center, its humanity. This Yoodlee presentation talks about one such incident that would have been erased from collective consciousness but for the slow-burning anger of a grandmother who wants the rapist of her granddaughter to pay for what he has done. From the moment we discover that a little girl has been violated and thrown in a garbage heap, we begin to wait for a moment of retribution and so does Ajji (Sushama Deshpande) as she meticulously plots revenge. She does so because she knows justice is denied to victims who have no privilege. The film is a wrenching account of all that is wrong with a society that considers girl children to be disposable and does precious little to protect them. Directed by Devashish Makhija, the film also stars Smita Tambe, Sharvani Suryavanshi and Vikas Kumar.

Also see: After massive backlash, writer Taslima Nasreen says her remarks on surrogacy was not aimed at Priyanka, Nick

Article 15: Anubhav Sinha's gritty film Article 15 digs deep into the reasons that make caste based violence and incidents like the gruesome Badaun rapes in Uttar Pradesh possible. What kind of a mentality would drive men to not just rape two minor girls, kill them and hang their bodies from a tree? The story unfolds in a UP hinterland where cast divides run deep and power manifests in sexual violence, brutal discrimination at all levels as well as the normalisation of inequality. This film in a way could be considered as a microcosm of the fast-spreading ills that are ailing our society today. Ayushmann Khurrana stars with Nassar, Manoj Pahwa, Kumud Mishra, Isha Talwar, Sayani Gupta, Mohammed Zeeshan Ayyub, Sushil Pandey, Veen Harsh, and Sumbul Touqeer.

Highway: Imtiaz Ali’s Highway tackles a lot of themes but at its heart is the suppressed memory of sexual abuse and the conspiratorial silence that families impose around such issues. The film leads up to a cathric moment when Veera (Alia Bhatt)  confronts her abuser in front of her entire family. Even though at some level, this film is about finding authenticity in a world that forces conformity upon individuals, especially women, it is also about a child-abuse survivor who finally finds her agency, her voice, and her freedom. The film also stars Randeep Hooda.

Secret Superstar: This Advait Chandan film is about how difficult it is for daughters born in conservative families to live their dreams and reach out for the stars. It is also about parenting and how when mothers stand up to patriarchy, their daughters can break free from generational cycles of oppression. The story challenges us to question the constraints we bind the girl child in and reminds us of the many secret superstars who had to sacrifice their aspirations for their parents and families. Secret Superstar features Aamir Khan, Zaira Wasim, Meher Vij, Raj Arun, and Tirth Sharma.