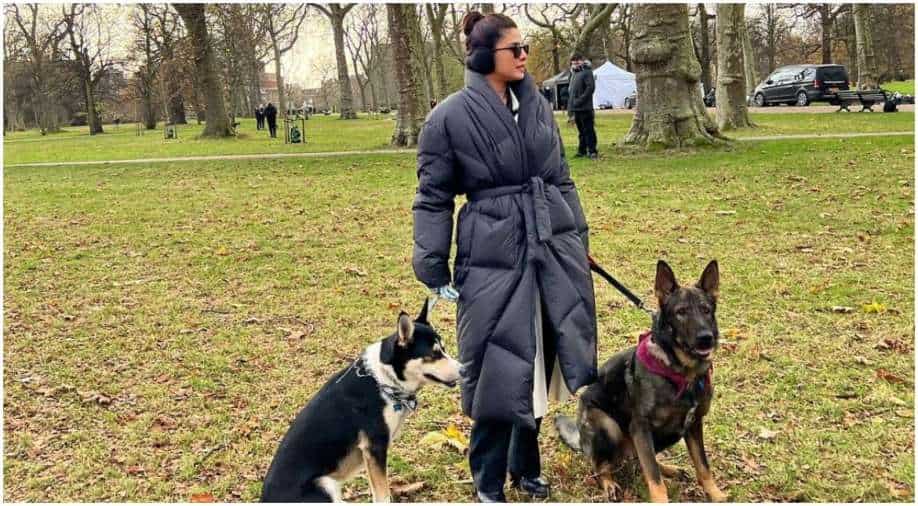 Priyanka Chopra just upped the bring-your-puppy-to-work game by a massive margin. The global star, who is currently in London shooting for her upcoming Russo Brothers' series 'Citadel', shared some uber cool photos from the set.

On Wednesday, Priyanka Chopra shared a few snaps while shooting at the iconic Hyde Park in  London and was accompanied by her pet family: Gino, Diana and Panda. The actress posted pictures from her time with these beloved pets and wrote on her Instagram caption, "Bring-your-pups-to-work day," and added the hashtag #Citadel to it.

'Citadel' has its production spread across India, Italy and Mexico and stars Richard Madden and is being directed by the Russo Brothers. This series also marks Priyanka's second collaboration with Amazon Prime Video, her first one being the Sangeet Project.

The couple who got married in a glitzy ceremony in 2018, took to their Instagram handle to share a glimpse of their romantic candlelight dinner.

Sharing a glimpse of the same, Nick dropped a video featuring PeeCee and the beautiful decor, which included a neon sign that spelt out “FOREVER” along with floral arrangements, wine and petals on the floor. He captioned it, “3 years” followed by a heart emoji.

The actress looked stunning as she sat in a royal blue chair wearing a neutral-coloured sleeveless turtleneck dress.

Meanwhile, Priyanka also gave a small insight into her romantic date night.  She shared a picture of her dinner table set up featuring red candles, flowers and even a card that read, “Found you, married you, keeping you.” In the back, we can see a white feathery wall with the words ‘always and forever’. Chopra shared the picture with a caption, “Living the dream @nickjonas.”