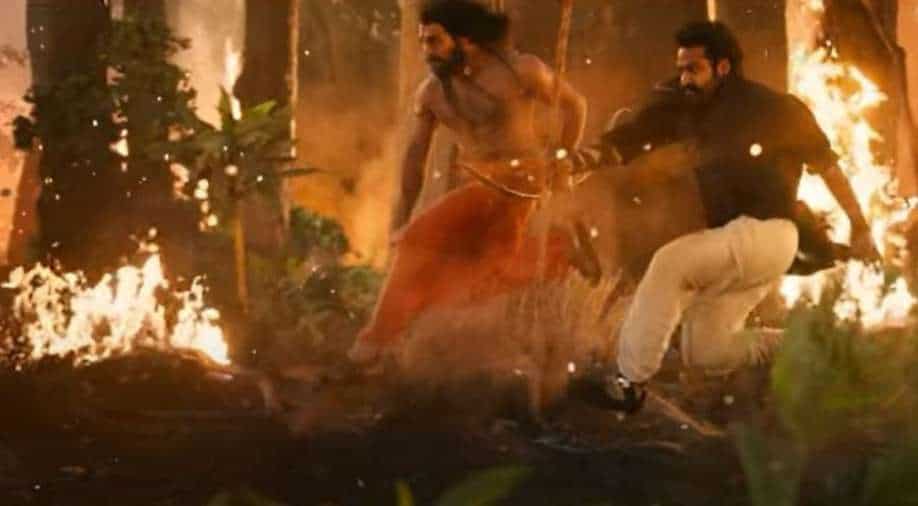 Ram Charan and Jr NTR in a still from 'RRR' (Image via Youtube screen grab) Photograph:( Others )

'RRR' is filmmaker SS Rajamouli's first film since the release of 'Baahubali: The Conclusion' which hit theatres in 2017.

It's finally here. After months of teasing fans with stills of the film, makers finally released the first trailer of the ambitious film 'RRR' (Rise Roar Revolt). Directed by SS Rajamouli and featuring JR NTR and Ram Charan in lead roles, the trailer gives a sneak peek into the visual grandeur that is set to unfold on the big screen soon.

Set in pre-independent India, the film is based on freedom fighters Komaram Bheem(Jr NTR) and Alluri Sitarama Raju (Ram Charan). The two leads are shown performing awe-inspiring action stunts throughout the trailer.

The trailer also gives a glimpse of other actors who are part of the film, like Alia Bhatt- who makes her debut in Telugu films with this film, Olivia Morris, Shriya Saran, Samuthirakani, Alison Doody, Ray Stevenson and Ajay Devgn.

The film was delayed due to the pandemic and was earlier set to release in 2020. 'RRR' is filmmaker SS Rajamouli's first film since the release of 'Baahubali: The Conclusion' which hit theatres in 2017.

'RRR' will now release in theatres in Telugu, Hindi, Tamil, Kannada and Malayalam on January 7, 2022.