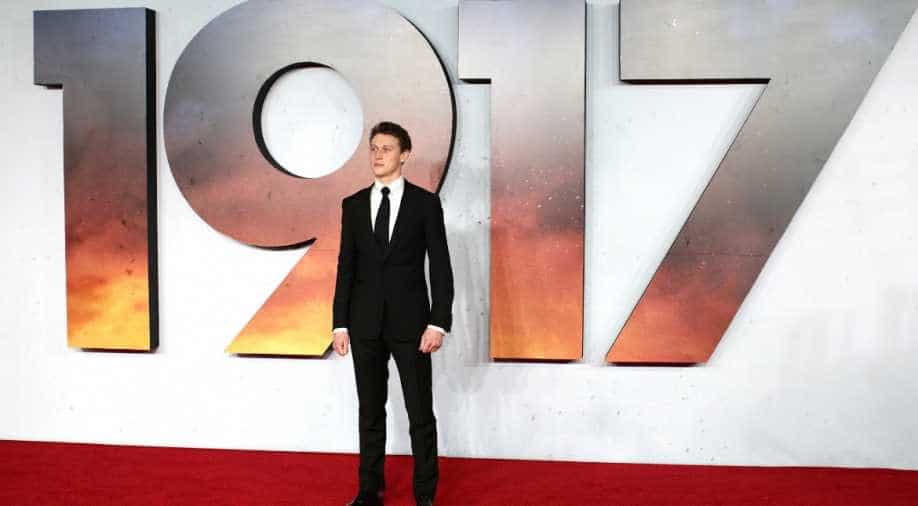 Actor George MacKay poses at the world premiere of the film "1917" in London Photograph:( Reuters )

Sam Mendes told a movie theatre audience in Los Angeles he chose this unusual storytelling technique because he wanted viewers "to feel like they were being pulled forward rather than being presented with information".

Presenting his World War One battlefield movie '1917' as a single shot had pros and cons for Oscar-winning director Sam Mendes. Mistakes meant lengthy retakes but "accidents" also gave an authenticity of life in the trenches.

From start to finish, fluid camerawork follows two young British soldiers tasked with crossing enemy lines to stop another battalion from launching an imminent attack on what appear to be retreating German troops but is really a trap.

Made to look as if it is one continuous shot, the drama, set during a single day in April 1917, aims to tell the story in real-time, immersing the audience in the mission of protagonists Blake and Schofield.

That meant lengthy rehearsals and super-long takes for the cast, led by Dean-Charles Chapman and George MacKay and including Colin Firth, Andrew Scott and Benedict Cumberbatch.

"When things went wrong we started again and sometimes that was very frustrating ... There were a few moments when I thought why have I done this to myself," Mendes told Reuters.

"A little bit of accidents is a good thing. You had your weather and light changes all the time ... animals, babies ... mud ... The men kept slipping over. But sometimes you want that in there. You want the reality of the physical exhaustion of what they're going through."

Last month, Mendes told a movie theatre audience in Los Angeles he chose this unusual storytelling technique because he wanted viewers "to feel like they were being pulled forward rather than being presented with information".

"We had over a mile of trenches that we dug because we couldn't repeat anything, we could never go back," he said.

Chapman (Blake) and MacKay (Schofield) rehearsed every scene on location for months, he added.

"The time we did start filming we unconsciously knew the steps and really the whole filmmaking process was about choreographing almost like a dance between the actors, the camera, the set," Chapman told Reuters in London.

"Walking at a crouch trying to hold the tension of the scene emotionally, the focus, and also just slipping all over the place - what we were doing was a drop in the ocean compared to what the men went through," MacKay added.

British-born Mendes, known for "American Beauty" and James Bond films 'Skyfall' and 'Spectre', has said '1917' was inspired by his grandfather's experiences on the frontlines of World War One.

Filmed this year and released in time for awards season, it has already been nominated for three Golden Globes.

"The reason I was able ... to make it quick was because we didn’t need to edit it because we had to put it together while we were shooting," Mendes told Reuters.