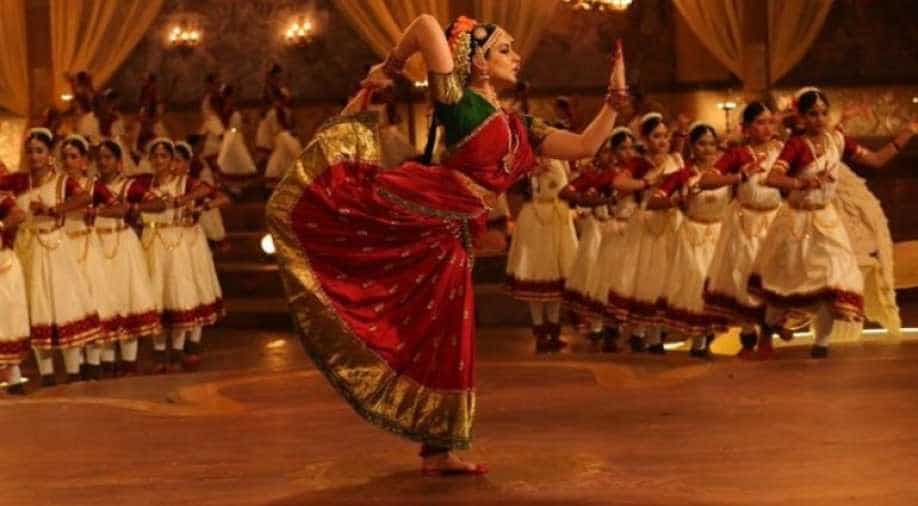 Kangana Ranaut, who is awaiting the release of her upcoming biographical drama 'Thalaivi' looked captivating in a sneak-peek from the shooting of the film.

Rangoli Chandel, sister of Kangana Ranaut shared the intriguing picture along with a caption that reads, "This extraordinary still is from Thalaivi -The revolutionary leader."

This extraordinary still is from Thalaivi -The revolutionary leader 🙏🙏❤ pic.twitter.com/83bQKiEMeK

Kangana who will be seen essaying the role of former Tamil Nadu Chief Minister Jayalalithaa is seen in a frame where she is embellished in golden bordered red saree, donning a traditional avatar, complete with a gajra and a gold headgear.

#Repost @ashwinyiyertiwari ・・・ Because this hardworking talented human of mine needed to be hugged for #Panga 💚 So a surprise visit to Chennai. Jaya / Thalaivi in animated conversation with her dost to be continued. @team_kangana_ranaut

She is seen striking a Bharatanatyam pose, while in the backdrop the fellow dancers are seen posing for the dance performance.' Thalaivi' is being helmed by AL Vijay and has been written by 'Baahubali' and 'Manikarnika' writer KV Vijayendra Prasad and 'The Dirty Picture' and 'Once Upon a Time in Mumbai' writer Rajat Arora.