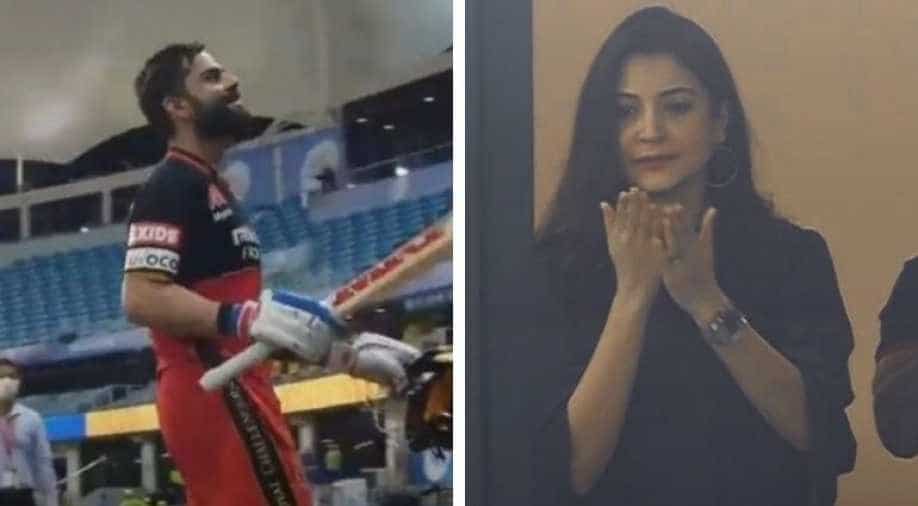 Virat- Anushka are expecting their first child in January 2021

Anushka Sharma and Virat Kohli's fans can't stop gushing over the couple stadium romance.Saturday's striking match between Royal Challengers Bangalore (RCB) and Chennai Super Kings (CSK) had RCB winning the match but it was the couple that made headlines.

As husband Virat smashed a good inning, wife Anushka couldn't stop cheering for her man and that captured everyones attention.

Anushka was seen clapping and blowing kisses towards her husband after he was walking back to the pavilion after the innings break. As always, this time also, Virat too didn't forget to respond to his lady love with an adorable smile.

The cameras captured the beautiful moment of the couple, fans can't stop swooning over them.

Check out the Twitterati reaction below:

Virat Kohli scoring 90 runs, walking in the pavilion not-out while Anushka Sharma who is expecting smiles with her visible baby bump cheers for him. This is wholesome. This is what dreams are made up of. My heart is so full that I just can’t. They just made my shitty day better. pic.twitter.com/5NUR3E5Fg8

Congratulations Anushka Sharma. You take all the credits today. ❤️ Virat Kohli played well today only because of you.

What a picture, What a moment.!! Virat Kohli & Anushka Sharma ❤️!! #CSKvsRCB pic.twitter.com/j6rXdafOIM

good inning by Virat
and that was for Anushka pic.twitter.com/whS4bg5QFU

The celebrity couple are expecting their first child in January 2021, the couple announced their bundle of joy on their Instagram, before the start of the IPL 2020.

Virat Kohli scored the highest score by a team captain against the Chennai Super Kings (CSK) in 13 IPL season, as he scored 90 not-out off just 52 balls. Yesterday ( September 11), RCB defeated CSK by 37 runs.