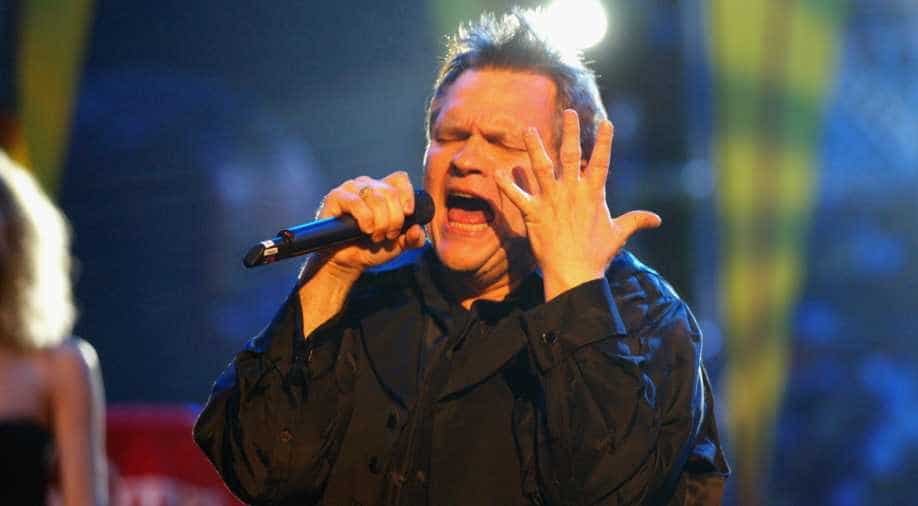 Meat Loaf, whose real name is Marvin Lee Aday, had postponed a show in the city of Calgary on Monday because of illness. Photograph:( Getty )

Of Meat Loaf's contributions to the American karaoke canon, the most potent may be 'Paradise by the Dashboard Light,' the 8 1/2-minute opus to nascent sexuality that appeared on his multiplatinum 1977 debut, 'Bat Out of Hell.'

The singer Meat Loaf, who died Thursday, was a rock ’n’ roll anomaly: a portly force of nature whose theatrical musicality made him an unlikely but undeniable radio staple and a standout presence in films such as 'The Rocky Horror Picture Show' and 'Fight Club.'

Of his vital contributions to the American karaoke canon, the most potent may be “Paradise by the Dashboard Light,” the 8 1/2-minute opus to nascent sexuality that appeared on his multiplatinum 1977 debut, “Bat Out of Hell.” The story of a teenage couple about to consummate their relationship in a car, the song is built around a boisterous call-and-response duet between Meat Loaf and singer Ellen Foley. The sexual act itself is narrated by the famous New York Yankees shortstop and play-by-play announcer Phil Rizzuto, over a rollicking barroom groove. (Sample dialogue: “Here’s the play at the plate — Holy cow, I think he’s gonna make it!”)

“Meat got to act in that song, and he loved acting,” bassist Kasim Sulton, who performed on “Bat Out of Hell,” said in a phone interview. “He did that with every song, but especially in ‘Paradise’ because it was indelibly linked to his whole life. He loved performing that song more than I could possibly tell you.”

Like many of Meat Loaf’s best-known songs, “Paradise by the Dashboard Light” was written by composer Jim Steinman. Lifelong collaborators, the two met in New York City when Meat Loaf auditioned for Steinman’s 1973 musical “More Than You Deserve.” Not long after, Meat Loaf was cast as John Belushi’s understudy in a “National Lampoon” roadshow, and he found Steinman a job as a piano player on the tour.

It was on that tour that “Paradise” and many of the songs that would turn up on “Bat Out of Hell” first took shape. “We were driving around the country in a little blue van, and wherever we would play the ‘National Lampoon’ show, Jim would find a piano,” Foley said in a phone interview. “I don’t want to be a shrink, but I think it was probably him working out his own teenage desires that he hadn’t done in real life but was able to experience in this hyperemotional material. He just wanted to create something that nobody had ever heard before.”

In a 2021 interview with Rolling Stone, Meat Loaf discussed his uncredited contributions to Steinman’s writing process. “My input was more arrangement, methods, a word or two here and there,” he said. “My job was to make the songs focused, the same way you’d get a character focused. Every song was a character. I’d get Jim to add a word, change the melody.”

Back in New York, the three were joined by singer Rory Dodd, who met Meat Loaf in 1975 while working on the Broadway musical “Rockabye Hamlet.” “We would rehearse every day, singing the same songs and working out the arrangements,” Dodd said in an interview. As a quartet, they performed these songs at clubs across the city as Meat Loaf and Steinman went looking for a record deal.

That was slow coming, as most record executives didn’t quite understand what they were hearing. But they picked up some admirers along the way. Max Weinberg, drummer for Bruce Springsteen’s E Street Band, recounted being told about Meat Loaf and Steinman by a mutual friend and watching them perform in a rehearsal studio on 57th Street. “Right there, in this little 8-by-10 room, Meat Loaf and Ellen Foley delivered ‘Paradise’ full-bore,” he said. “I had a lot of experience with Broadway-type presentations, so the idea of going into a studio and listening to a show being put together — immediately, I got the theatricality of it.”

One of those admirers was artist Todd Rundgren, who, under the mistaken impression that Meat Loaf and Steinman had a record deal, agreed to produce “Bat Out of Hell.” (When the truth came out, he also agreed to fund the recording himself.) In fall 1975, the musicians convened at Bearsville Studio in Woodstock, New York, where they were joined by members of Rundgren’s band Utopia as well as Weinberg and Roy Bittan, the piano player for the E Street Band.

Even with a completed album, Meat Loaf and Steinman had difficulty finding a record deal. Dodd recalled record executive Clive Davis telling Steinman “that he had to learn how to write rock ’n’ roll.” But the album was eventually accepted and released by executive Steve Popovich’s Cleveland International Records, and it slowly gained traction upon its 1977 release. Its popularity was boosted by a promotional video clip for “Paradise” in which Meat Loaf and singer Karla DeVito — lip-syncing over Foley’s vocals — performed onstage.

In the 2011 book “I Want My MTV,” Meat Loaf said he secured the video placements before midnight showings of “The Rocky Horror Picture Show.” “That is still the No. 1-selling album in the history of Holland, and I never played there,” he said. “It’s all because of the ‘Paradise by the Dashboard Light’ video.”

DeVito, who replaced Foley for the initial “Bat Out of Hell” tour, said audiences “went nuts” when the band got to “Paradise.” For these shows, she was given free rein to create the character of what she called “the girl in white” — the innocent counterpart to Meat Loaf’s lascivious singer. “He just wanted to put on the best show possible every night,” she said. Over the years, performances of the song would sprawl to the 20-minute mark because “Meat would milk it for all it was worth,” Sulton said.

Weinberg said Meat Loaf, ultimately, was a truly devoted performer. “Whatever he did, he committed to it,” he said. “And in committing to it, he made it real for you.”