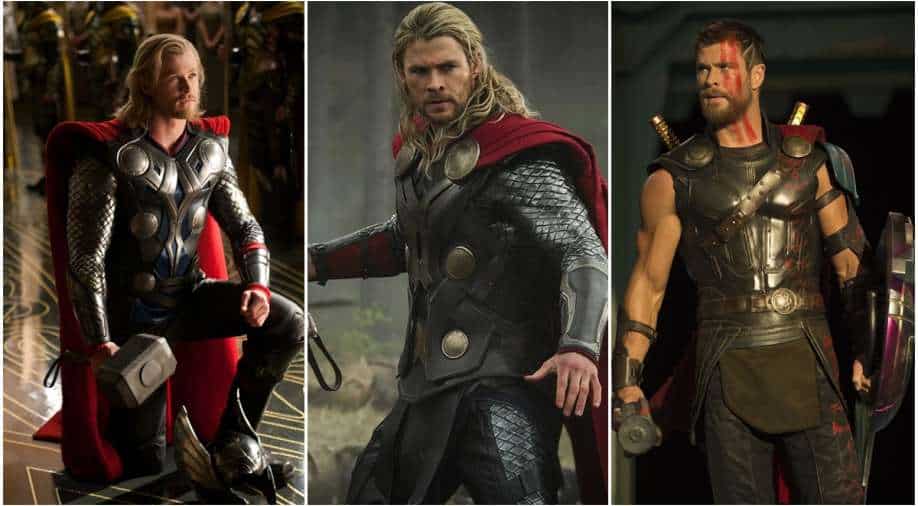 Thor has had a chequered journey in the Marvel Cinematic Universe. Photograph:( Others )

Chris Hemsworth's God of Thunder has had a chequered journey in the Marvel Cinematic Universe until now and in the initial days, the superhero was not as loved as he is now. Before 'Thor: Love and Thunder' let's recap the journey of the character.

Chris Hemsworth's Thor is the only MCU superhero to get a fourth movie 'Thor: Love and Thunder'. While 'Captain America 4' is in development, it will feature a new iteration of the superhero, Sam Wilson played by Anthony Mackie, and not Steve Rogers (Chris Evans), so that doesn't count.

The Taika Waititi film will also bring back Natalie Portman's Jane Foster. Apart from Thor Odinson himself, Foster will assume the identity of Thor as well -- Mighty Thor, to be precise and wield Mjolnir.

The reason for the very existence of 'Love and Thunder' is the popularity of the character and the willingness of Chris Hemsworth to continue with the character for more than a decade now.

But it was not always so. The God of Thunder has had a chequered journey in the Marvel Cinematic Universe until now and in the initial days, the superhero was not as loved as he is now.

Before 'Love and Thunder' let's recap the journey of the character.

The superhero was introduced in 2011's 'Thor' directed by Irish filmmaker-actor Kenneth Branagh. Branagh, a theatre veteran, tried to infuse the film with a Shakespearean touch. The film began by recounting a war in 965 AD between the Asgardians, led by Odin (Sir Anthony Hopkins) and the Frost Giants of Jotunheim, one of the nine realms in Norse mythology and the Marvel Comics lore inspired by it.

In the present times, Thor, the only trueborn son of Odin, is all set to become the next ruler of Asgard. He also has a younger brother Loki (Tom Hiddleston), who is actually the son of Laufey, ruler of the Frost Giants, and a Frost Giant himself. In collusion with Laufey, Loki attempts to acquire the Casket of Ancient Winters, the source of Frost Giants' powers.

Thor, unaware of Loki's treachery, travels to Jotunheim to confront Laufey with Asgardian warriors, including Loki, disregarding Odin's orders. The battle between the Asgardians and the Frost Giants rages on until Odin rescues Thor and others. The truce between the two races is broken.

Thor is stripped of his inheritance and even his powerful weapon Mjolnir and gets stranded on earth. Still physically powerful, but without powers that make him the god of thunder.

At Asgard, Loki takes control of the throne after Odin falls into Odinsleep, which recharges his powers. He also invites Laufey to take Asgard in Odin's indisposed state. Thor's allies, the Warriors Three, (Volstagg, Fandral, and Hogun) find him on earth and a powerful automaton entity called the Destroyer is dispatched to take care of them.

Thor offers himself to the Destroyer instead, proving his worth and calling Mjolnir destroys, um, the Destroyer. He returns to Asgard and confronts Loki. In the ensuing duel, Loki seemingly dies, one of his many 'deaths' to come.

Thor agrees with Odin that he is yet to be ready for the throne.

Thor joins the other Avengers in the battle for the earth against the Chitauri army led by Loki, who is, indeed, alive. He and Tony Stark fight briefly over what to do with Loki, who does not appear to be too difficult to capture. Loki is captured, and causes a rift between the Avengers, who are scattered. At one point, Thor also fights the Hulk, proving almost equal to the Green Goliath in terms of raw strength.

Towards the end of the movie, he also takes on his brother and saves the people of New York along with the rest of the Avengers. He and Hulk together destroy a Leviathan, beasts used as weapons and means of transport by the Chitauri.

Directed by Alan Taylor, 'Thor: Dark World' introduces another ancient threat to the Asgardians, the Dark Elves led by Malekith (Christopher Eccleston). Loki is imprisoned in Asgard for his crimes in 'The Avengers'. An event called the Convergence is approaching in which Nine Realms align themselves. On earth, and elsewhere, portals to different worlds begin to appear as random. Foster gets transported to a dark world wherein she absorbs the Aether, the weapon of Malekith that he wanted to unleash in the times of Bor, the father of Odin.

Thor takes Foster to Asgard, where Odin spots the Aether. Malekith, who was in suspended animation all this while, rises due to Aether's release. Malekith and his top lieutenant Algrim search for Foster in Asgard. Frigga, Thor's mother, is fatally wounded but is successful in protecting Foster.

Thor and Loki travel to Svartalfheim, the home of Dark Elves, with Foster to lure Malekith and Algrim. In a battle, Loki "dies" protecting Thor.

The God of Thunder and Malekith battle in various worlds and finally on earth. He, Foster, Darcy, and Erik manage to send the Dark Elves kind back to Svartalfheim, where he is crushed by his own ship. Thor leaves the earth, and we see the "Odin" he said goodbye to is actually Loki in disguise.

In 'Age of Ultron', Thor is found battling the Hydra forces to retrieve the Scepter that is somewhere in a research Base. After acquiring the Scepter (and facing Wanda and Pietro Maximoff), Tony asks Thor to let him examine the Scepter. He agrees.

Ultron, a rogue programme created by Tony and Bruce Banner, attacks and quickly takes over. While Thor and other Avengers kept destroying his body, he kept popping up in others. As Avengers bickered amongst themselves and tried to gauge Ultron's true intentions, Wanda messed with their minds. Thor was accosted by a vision of Asgard's destruction.

Tony and Bruce, meanwhile, created another AI being, this time Vision (Paul Bettany), a near-invulnerable android with Mind Stone as his source of power. The Avengers, including Vision, eventually fought and defeated Ultron in Sokovia.

The film that actually made Thor cool. When Thor got back to Asgard, he found Loki ruling the realm, and Odin nowhere near to be found. They eventually track him to Norway, but he bid them goodbye and died. As soon as he is gone, Hela (Cate Blanchett) arrives and easily overpowers both Thor and Loki, sending both to different corners of the universe.

Thor eventually wound up in Sakaar, the refuse of the universe ruled by Grandmaster (Jeff Goldblum), who made Thor fight his old comrade Hulk. The fight ends without a definite conclusion, and Thor, along with Bruce Banner, Loki, Valkyrie, an escapee from Asgard, and Thor's new friend Korg, got back to Asgard and fought Hela. But she still appeared undefeated, until Thor called Surtur, the fiery demon destined to destroy Asgard. He proceeds to do exactly that, and Hela also dies in the process.

Thanos and the Black Order capture Thor's ship, kill most of the Asgardians, torture Thor and kill Loki. Thor is saved by a dying Heimdall (Idris Elba). He joins forces with the Guardians of the Galaxy and goes to Nidavellir, the home of weaponsmith Eitri (Peter Dinklage) with Rocket and Groot to forge a new weapon since Hela had destroyed Mjolnir. He gets it thanks to Groot's much-needed help, and the three reach earth in the middle of the Battle of Wakanda. Thor makes quick work of the Outriders, and almost kills Thanos, but the Mad Titan is successful in snapping half of all living beings in the universe out of existence.

The Avengers reach the unnamed planet where Thanos, after the snap, is living a quiet life. They confront him and realise he cannot undo the damage as the Infinity Stones were destroyed. They are helpless until Scott Lang (Paul Rudd) apprises them how time travel can be used to get back the destroyed half of the universe. Thor, now a stocky, depressed gamer in New Asgard, and others do exactly that until Thanos from an earlier time arrives and bombs the hell out of Avengers HQ. As Thor fights Thanos along with Tony Stark and Captain America, the snapped Avengers and others arrive and defeat Thanos and his forces.

In the end, Thor leaves with the Guardians on Benetar, and with them, we find him in 'Love and Thunder'.