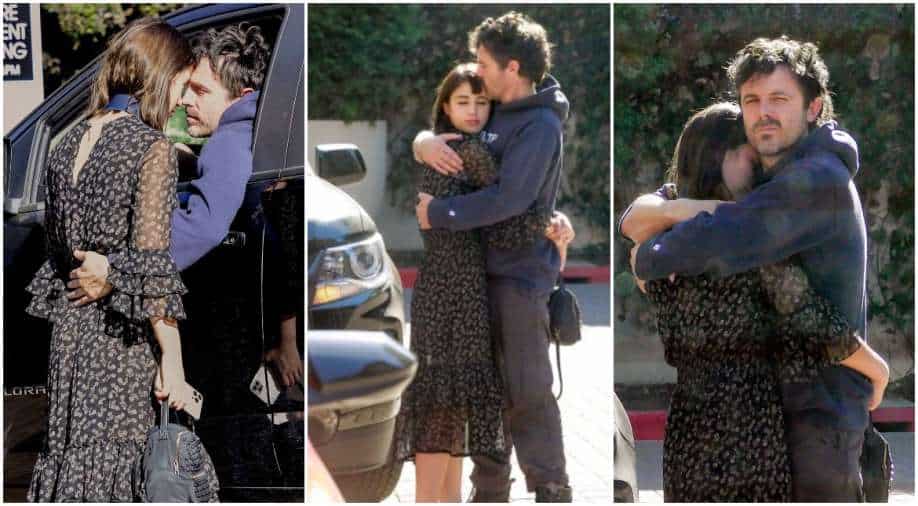 On Tuesday, Casey Affleck was pictured dropping off, smooching and later locked in a passionate embrace with actress Caylee Cowan in Los Angeles.

After big brother Ben Affleck rekindled his romance with former fiance Jennifer Lopez, it was time for younger brother Casey to find love again. And, he has... in 23-year-old actress Caylee Cowan.

Although Casey Affleck and long-time actor-girlfriend Floriana Lima didn't work out, the Oscar-winning actor seems to have found love in someone new and young.

Also read: Vir Das made a design student's dream come true as he wore his creation to Emmys

On Tuesday, Affleck was pictured dropping off, smooching and later locked in a passionate embrace with actress Caylee Cowan in Los Angeles.

The duo came out of his car and exchanged one last hug and a few kisses.

Contrary to reports, neither Affleck nor Lima have confirmed their break-up but the new pictures with the new girl suggest that the older partnership is over.

Affleck and Lima reportedly began dating in 2016, right after Affleck ended his marriage with his now-ex-wife Summer Phoenix.

Casey Affleck was accused of making “unwanted sexual advances” towards producer Amanda White during the shoot of 'I’m Still Here: The Lost Year of Joaquin Phoenix'.

White filed a $2 million lawsuit alleging that the actor used her bedroom to have sex with multiple women and sent her “abusive” texts when she turned down his offer to share a hotel room with him and had ordered a crew member to flash his private parts in front of her against her will.

There was a second lawsuit against the actor by the cinematographer of 'I’m Still Here', Magdalena Gorka, when she sued Affleck for $2.25 million, wherein she alleged he slipped into her bed and touched her without her consent while she was asleep and threatened to withhold her payment and credit on the film after she had quit.

These accusations of inappropriate behaviour and sexual misconduct resurfaced during Affleck’s Oscar's Best Actor nomination for 2016 drama 'Manchester By the Sea'.

The lawsuits were eventually settled.

“First of all, that I was ever involved in a conflict that resulted in a lawsuit is something that I really regret. I wish I had found a way to resolve things in a different way. I hate that. I had never had any complaints like that made about me before in my life and it was really embarrassing and I didn’t know how to handle it and I didn’t agree with everything, the way I was being described, and the things that were said about me, but I wanted to try to make it right, so we made it right in the way that was asked at the time. and we all agreed to just try to put it behind us and move on with our lives, which I think we deserve to do, and I want to respect them as they’ve respected me and my privacy. And that’s that," Affleck told the Associated Press in 2018.