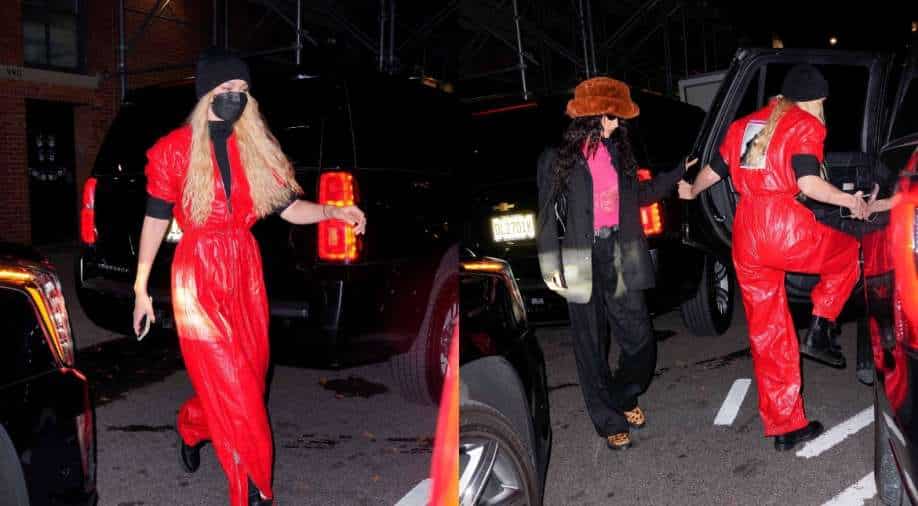 Gigi Hadid steps out in public for the first time since split from Zayn Malik Photograph:( Others )

For her first public appearance post break-up with Zayn Malik, Gigi Hadid was joined by her supermodel sister Bella Hadid, who was seen wearing a black blazer and trousers with a pink T-shirt and a fuzzy brown hat.

Gigi Hadid has switched it up yet again, and this time she has gone bold and blonde.

On Tuesday, the supermodel debuted her new hairdo--bangs--by posting a photo on Instagram.

Reportedly, Hadid's posts were from an advertisement shoot for high-street fashion brand H&M in which she can be wearing a white vest and matching trousers.

And on Wednesday, the supermodel stepped out in public for the first time since her ugly break-up with Zayn Malik. She was seen wearing a completely new hair colour: blonde.

For this outing, Hadidi was seen sporting a red vinyl jumpsuit with a black turtleneck underneath and teamed the funky look with a pair of black sneakers and a matching beanie.

Also read: Get this: Will Smith had a lot of meaningless sex and puked after orgasm

Hadid’s was joined by her supermodel sister Bella Hadid, who was seen wearing a black blazer and trousers with a pink T-shirt and a fuzzy brown hat.

The supermodel broke up with her musician partner Zayn Malik, with whom she shares 1-year-old daughter Khai.

The duo, who allegedly always had a tumultuous relationship, with them breaking up every once in a while, came to an explosive end after allegations from Hadid’s mother, Yolanda Hadid, that the 'Pillowtalk' singer had “struck” her during an argument in September surfaced.

Malik pleaded no contest to four counts of harassment for allegedly calling Yolanda a “f—king Dutch slut,” among making other derogatory remarks and pushing her into a dresser.

Zayn Malik has vehemently denied Yolanda Hadid's claims. Gigi, however, is yet to publicly comment on the allegations and the subsequent break-up. The only statement she's made via her spokesperson is that she is “solely focused on the best for Khai.”