‘SNL’ gives Ted Cruz his own version of ‘Sesame Street’ 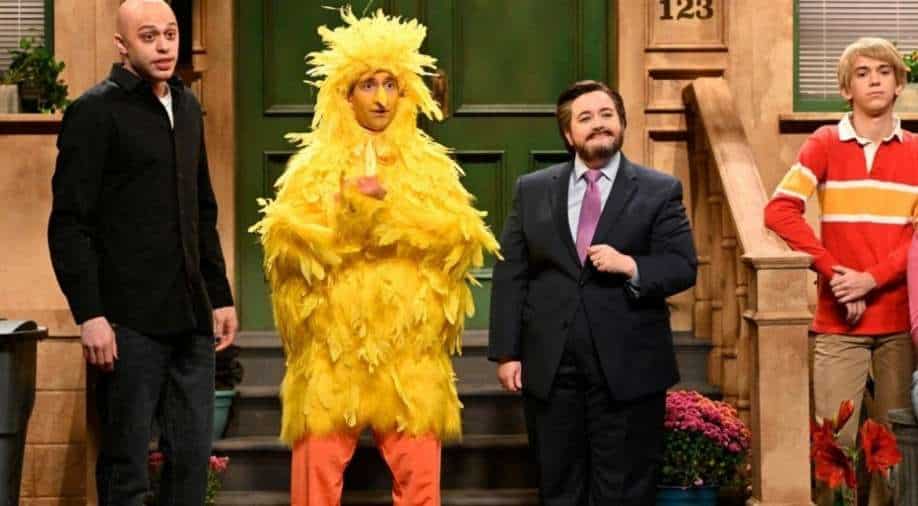 “SNL” didn’t get the support of any actual Muppets, so the show created its own alternate version of “Sesame Street,” which it called “Cruz Street.”

Back in 2012, when the then-Republican presidential nominee Mitt Romney professed his affection for Big Bird but nonetheless vowed to cut funding for PBS, “Saturday Night Live” brought in Big Bird himself to explain that he wasn’t a political creature and didn’t “want to ruffle any feathers.”

Almost a decade later, after the fictional, good-natured Big Bird said in a tweet that he had received a COVID vaccine, he has drawn the ire of Sen. Ted Cruz of Texas, who complained that the tweet was “government propaganda for your 5-year-old.”

This time around, “SNL” didn’t get the support of any actual Muppets, so the show created its own alternate version of “Sesame Street,” which it called “Cruz Street.”

Aidy Bryant, who played Cruz in the opening sketch, stood in front of what looked like a familiar brownstone and explained, “For 50 years I stood by as ‘Sesame Street’ taught our children dangerous ideas, like numbers and kindness.”

She continued: “But when Big Bird told children to get vaccinated against a deadly disease, I said enough. And I created my own ‘Sesame Street,’ called ‘Cruz Street.’ It’s a gated community, where kids are safe from the woke government.”

Following the show’s theme song, Bryant was joined by Cecily Strong as Rep. Marjorie Taylor Greene of Georgia, toting what she said was an AR-15.

Strong said she was “just taking a break from releasing the phone numbers of Republicans who voted for the infrastructure bill so they and their families get death threats, and I thought I’d stop by.”

Bryant’s Cruz was also visited by Kyle Mooney, dressed in a makeshift Big Bird costume that probably wasn’t fabricated by Sesame Workshop. He said that in the week since he had gotten the vaccine, his feathers had fallen out (among other physical side effects he claimed to be experiencing).

To help out Mooney, Bryant brought out Pete Davidson, who played comedian and podcast host Joe Rogan. He offered his own unreliable remedies, which consisted of “zinc and ayahuasca and some horse medicine.”

Other cast members played alternate versions of “Sesame Street” characters, including Alex Moffat and Mikey Day as Bert and Ernie; Chris Redd as a furry green creature called Oscar the Slouch (“Papa Joe Biden gave me so many stimmies, I decided to quit working and live in this trash can”); and Aristotle Athari as the Recount Count.

And hey, for good measure, the sketch brought out Chloe Fineman as Britney Spears, newly released from her yearslong conservatorship. “Oh, my God, you guys, we did it,” she said.

Fake Ad of the Week

Spare a thought for all the men who discovered during the pandemic that they didn’t know how to form adult friendships and are now bereft of peer groups.

For their support — and for the benefit of their spouses and significant others — “SNL” has given us the Man Park, a dog parklike place where these well-meaning recluses can come together and share useless trivia, argue about “Rick and Morty” or communicate with one another simply by saying “Marvel” over and over.

We’re not saying we’re the target audience for this particular service, but when Andrew Dismukes asked “Who’s the GOAT, Michael Jordan or Tom Brady?” and Athari answered “How about Bo Burnham?” it felt so real.

Musical Performance of the Week

Taylor Swift got only one song on the show, but boy did she make it count: She delivered a blistering, 10-minute rendition of “All Too Well” from her newly released album of rerecordings, “Red (Taylor’s Version).”

Her performance — which ran even longer than Prince’s fabled eight-minute, three-song medley from an “SNL” appearance in 2014 — was accompanied by a short film that Swift directed, starring herself and actors Sadie Sink and Dylan O’Brien. The reemergence of “All Too Well” (a shorter version of which was originally released in 2012) has also resurfaced speculation on who the song might be about — speculation that the film seems to be reinforcing? — and we recommend that you give the song a full listen if you want to at least understand the leadoff joke on Weekend Update.

Weekend Update Jokes of the Week

Over at the Weekend Update desk, anchors Colin Jost and Michael Che riffed on the indictment of Stephen Bannon, the Kyle Rittenhouse trial and, yes, Taylor Swift.

Well, guys, I think the lesson we all learned this week is, never break up with Taylor Swift. Or she will sing about you for 10 minutes on national television. At the very least, return the scarf.

But in real news — I don’t really know what’s real anymore — ex-Trump adviser Steve Bannon, seen here moments after shooting out of a sewage pipe — sorry, I should use his full name, Stephen K. Bannon; the K stands for three Ks — was indicted this week for contempt of Congress. If convicted, Bannon would face up to two years in prison. Which from the looks of him, might be a life sentence.

Legal experts are saying that Kyle Rittenhouse crying on the stand as he described how he shot his victims will help him with the jury. Man, is there a White Tears Law School that I don’t know about? I notice that every time y’all get in trouble, you start crying, and everything just works out for you, whether you’re trying to beat a murder charge or trying to be a Supreme Court justice. [His screen displays a picture of Justice Brett Kavanaugh.]