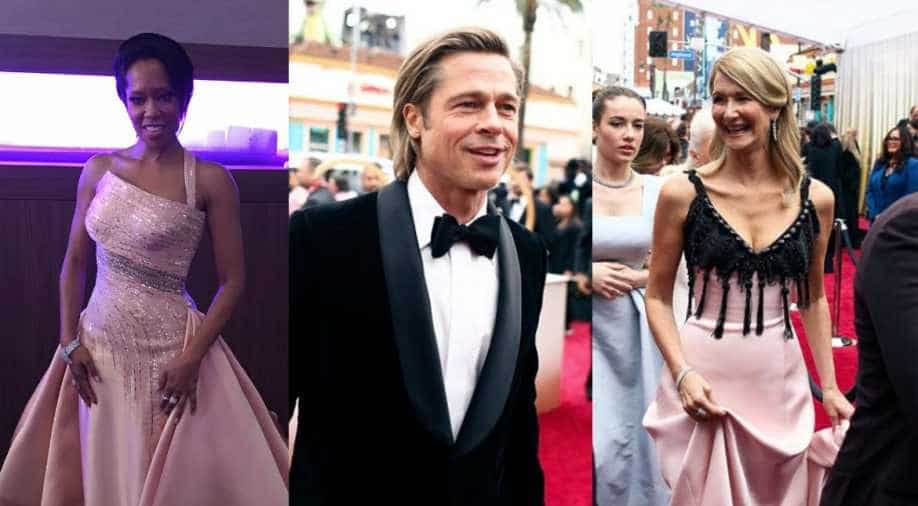 Pink gowns were a serious trend, along with basic black and statement necklaces. And then of course, there were showstopping fashion moments that don't neatly fit into any category.

Oscars night is the most glamorous in Hollywood, and the best in showbiz did not disappoint with their sartorial choices on Sunday.

Pink gowns were a serious trend, along with basic black and statement necklaces. And then of course, there were showstopping fashion moments that don't neatly fit into any category.

Here is a look at the highlights from the Oscars red carpet:

- Pretty in pink -
Several A-listers went for feminine elegance in shades of pink.

Laura Dern, seen as a shoo-in for the best supporting actress crown for her work as a divorce lawyer in "Marriage Story", wore a custom Armani gown with a bead-encrusted, tasseled black bodice and a flowing baby pink skirt.

And she brought the ultimate accessory: her actress mom Diane Ladd, a three-time Oscar nominee herself.

Regina King, who won the same award last year for her role in "If Beale Street Could Talk", stunned in a blush Versace gown with an asymmetrical neckline, one strap and sparkling silver detailing across the bodice.

And Idina Menzel -- who will perform the nominated song from "Frozen II" with several other actresses who voice Queen Elsa in foreign-language versions of Disney's animated film -- wore a strapless magenta J Mendel gown with a voluminous sash.

Completing the look was a massive teardrop diamond necklace.

And young Julia Butters, the child actress who featured in Quentin Tarantino's "Once Upon a Time... in Hollywood", joined the pink parade in a frothy cotton candy pink Christian Siriano dress.

- The showstoppers -
Some outfits just pop the instant you see them.

Janelle Monae, who will sing during Sunday's gala, shut the red carpet down in head-to-toe glittering silver Ralph Lauren. The backless gown had long sleeves, a full ball skirt and a slouchy hood.

Pop iconoclast Billie Eilish, the big winner at the Grammys two weeks ago and a performer on Sunday, kept up her signature "pajama couture" look in a white Chanel jacket and trousers, blinged out in the interlocking double-C logo.

- Making a statement -
Natalie Portman, a best actress Oscar winner in 2011 for "Black Swan", let her feelings about the lack of nominations for female filmmakers be known -- she had their names stitched into the black Dior cape she wore over her gown.

"I wanted to recognize the women who were not recognized for their incredible work this year in my subtle way," Portman told the Los Angeles Times.

- Basic black -
Portman was not the only Hollywood star in basic black.

Penelope Cruz turned heads in her Chanel halter gown with the house's signature white camellia on the bodice.

Saoirse Ronan, a nominee for best actress for her turn as Jo March in "Little Women", wore a Gucci gown with a black bodice that exploded in a cream-colored flounce at the waist and a pale lilac skirt.

And by and large, the men went for the classic black tux, including best actor nominee Joaquin Phoenix, who has worn the same Stella McCartney suit for the entire awards season.

His jacket lapels bore the number 24, worn by the Lakers icon and Oscar winner, who was killed in a helicopter crash two weeks ago.

"Tribute. Honor. Homage. We all miss him," Lee told ABC.