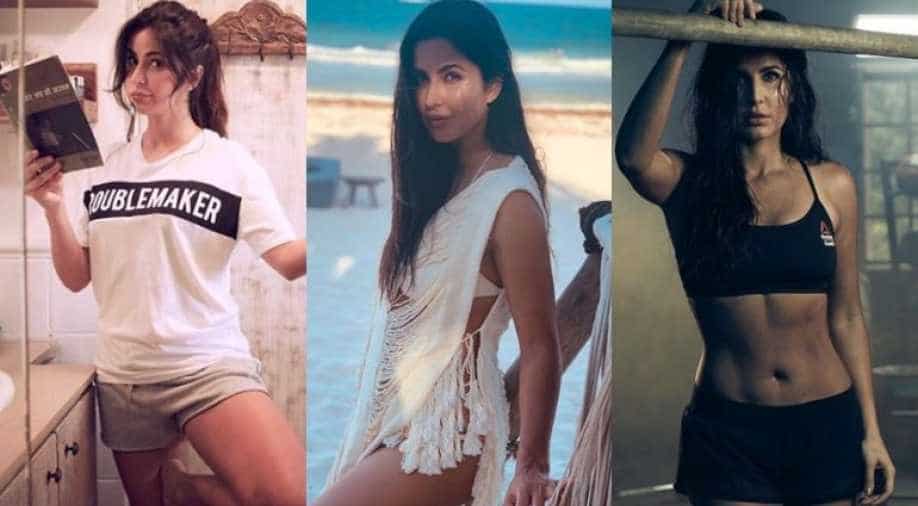 As Katrina Kaif rings in her 36th birthday on Tuesday, here's a quick look at how much she has changed as a professional over the years and evolved as an actor.

When Katrina Kaif stepped into Bollywood back in 2003, she wasn't an instant hit. In fact, it wasn't until ‘New York’ in 2009 that filmmakers and critics started seeing her as someone who was more than 'Bollywood's Barbie Doll’. Even though she still faces ups and downs like any other person, today, Kaif is one of the highest paid actresses in the country.

She tags her 16-year run in Hindi films as a beautiful journey. "It's been wonderful, a lot of hard work but also a lot of love from the audience," she once said.

As she rings in her 36th birthday on Tuesday, here's a quick look at how much she has changed as a professional over the years and evolved as an actor.

While she has been part of several blockbuster hits since the beginning of her career, she made more headlines for her personal life. Once rumoured to be dating Salman Khan, Katrina started dating and eventually living-in with actor Ranbir Kapoor.

When Katrina and Ranbir met on the sets of 'Ajab Prem Ki Ghazab Kahani’ back in 2009, they instantly hit it off. Even though Katrina did not confirm it until much later, the couple were on-and-off for a few years until their eventual break up in 2016.

After her break up, Katrina did not go down the rabbit hole of isolation and self-pity that a lot of people tend to do. Instead, she decided to take Hollywood actress Carrie Fisher’s advice and turned her broken heart into art. Between 'Tiger Zinda Hai' breaking all box office records and critics applauding her performance in 'Zero', Katrina proved why she is still on top in the industry.

Even though the exes were busy avoiding each other in the initial months after the break-up, they still completed 'Jagga Jasoos’ - a film that Ranbir produced and was already in works for more than a year. The film wasn't a success, but the duo took it in their stride and went on to the next project.

#JaggaAndJughead . In poignant conversation .... genius is sure to follow . 😄☺

“It's not always easy. You need to have nerves of steel to be in the film industry. It's an unpredictable place and no one can guarantee success. I believe in not taking success to your head, or failure to your heart," Katrina recently told a news agency.

When 'Bharat’ fell into her lap in 2018, it proved to be a blessing in disguise as the movie minted over Rs 200 crores.

“I decided until the day 'Bharat' wraps up, I wouldn’t think an iota about the future. Even if the world is falling on my head, I’ll deal with it after the film”, Katrina had said earlier in an interview.

“Luckily, the world did not fall on my head. I had the most peaceful, smooth and exciting shoot. It gave me a lot. I felt fulfilled”, she further added.

With her next release, ‘Sooryavanshi’ opposite Akshay Kumar, it seems like she has become the staple choice of the senior superstars in the industry.

Ever since she has not shied away from giving her fans glimpses into her daily life.

From goofy pictures in her pyjamas to glamour shots on the sets of her upcoming photoshoots, she has opened up her life and shown us the real Kat. As compared to her earlier, guarded self, she now appears to be much more at ease and carefree.

I'll figure it out as long as my brain doesn't get in the way .... #sometimesithinkimeinstein #letsoverthinkitsomemore

When senior journalist Jitesh Pillai asked her about the same, she revealed that “After my last relationship ended, I was forced to analyse many things about myself and my life and the way I was living it. Whatever was supposed to happen, happened."

“On one particular night, my attitude and approach to the world opened up again. It may sound far-fetched and crazy but I realised we have just one life and one day we’re going to die. These two things are certain. So, we can't be doing this to ourselves,” she said.

Her latest shots from Mexico are currently giving everyone major vacation goals.

Even though her photos have always been elegant and sexy (even when she makes funny faces in them), the last couple of pictures have definitely sent the temperatures soaring.

As Katrina evolves, so does her fashion sense. Her initial fail-safe rule for the red carpet of simple, monochrome dresses did not do her much good. However, in recent years, not only has she added a splash of colour into her wardrobe, her clothes are better fitted and flatter her immensely.

In a comparison between the actor's before-and-after Ranbir Kapoor phase, one major difference stands out- that she is no longer the tight-lipped recluse she was before. She no longer denies her past relationships, nor does she avoid media by keeping her head down and making a run for it. She is completely candid about her life and is comfortable in her own skin.

Katrina believes that her relationships have been "important experiences” that have taught her a lot.

“My last relationship was an experience, which was extremely important for me at so many levels. I’ve gained a lot more maturity, more understanding. Now, I don't have any fixed plan that this is how it has to go or this is how I have to be. That’s the openness I want to maintain. I don’t want to burden the other person or carry any baggage” she said.

She also feels that “it's important for a person to maintain their identity, have their own goals and purpose in life and to protect the friendships they have.''

Bollywood has always pitted its actresses against each other. No two actresses can ever be friends, insiders have repeatedly pointed out. But in the recent past Katrina's warm relationship with Deepika Padukone and Alia Bhatt - have made headlines. Katrina is also known to be friends with Sonam Kapoor and Anushka Sharma. Once a recluse, Katrina is far more comfortable in her own space now.

Congratulations to both of u @anushkasharma @virat.kohli all the love to u both 🌟❤️✨ Anushka u look so beautiful 😍. Wish u all the happiness in the world at the start of this new journey 👫

Kat has always been a fitness freak. Her washboard abs and perfect figure are a testament to that. It mustn't be easy maintaining that kind of a routine.

But for her, gymming every day is as essential as breathing. In an episode of the popular chat show, 'Koffee With Karan’, Varun Dhawan and Alia Bhatt revealed just how much Katrina enjoys her time working out and how she manages to take other people along too.

“Run when you can, walk if you have to, crawl if you must; just never give up."

Her videos and pictures on Instagram showing her sweating it out can encourage anyone to hit the gym.

Katrina, who is celebrating her 36th birthday in Mexico this year has come a long way. Through box office failures, relationship setbacks and career challenges, she has evolved as a person and as an actor.

The actress no longer feels like she has to hide anything. Instead, she feels as if the world is with her.

She goes with the flow and swears by Meryl Streep's words, “Put blinders on the things that conspire to hold you back. Especially the ones in your head. So, do your own investigation and find out for yourself what works for you”.

(*Rehwa is an Editorial intern with WION Digital)

James Bond is the gift that keeps giving: Pierce Brosnan

Anvita Dutt on 'Bulbbul' success: Good stories work regardless of the platform it's made for