First official photos of Sophie Turner and Joe Jonas's wedding are finally out! 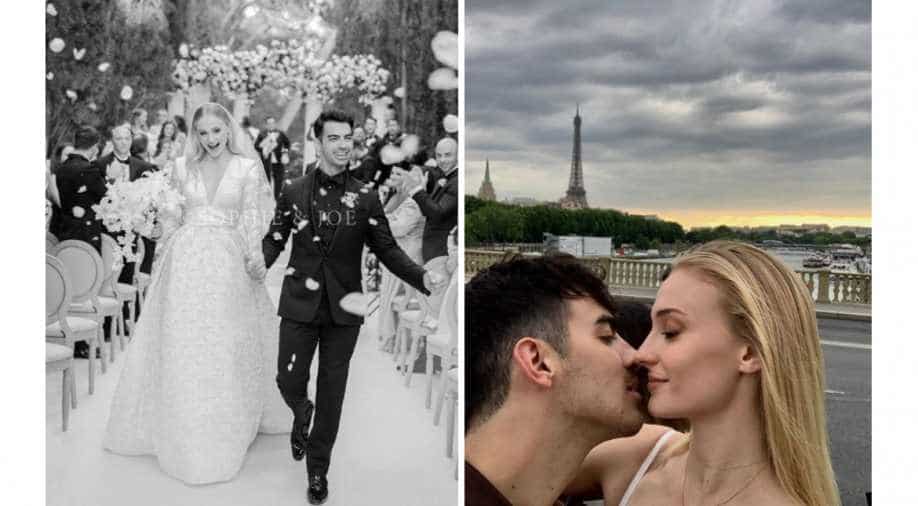 The couple tied the knot in Sarrians in southern France on June 29. It was their second wedding as they first took the vows on a secret Las Vegas night.

It’s been a couple of days since the cute couple Sophie Turner of the fame ‘Game of Thrones’ and the singing sensation Joe Jonas tied the knot in an elaborate function in Southern France.

Sophie and Joe tied the knot on June 29 as their parents, friends and high-profile guests made way to give their blessings to the couple.

Sharing a surprise with their fans today, the duo shared breathtaking photos from their white wedding as the bride and groom look much-in-love and joyful. While the bride chose a stunning white lace outfit with a short veil and almost natural-looking light makeup while Joe wore a smart black tuxedo for the big day.

Sophie’s dress was by Louis Vuitton as Nicolas Ghesquiere, Artistic Director of Women’s Collections at the brand shared a stunning photo of Sophie in the dress. You will take a moment to just look at the detailing and its beauty:

Sophie and Joe posted the first picture of their wedding on their Instagram and captioned it, "Mr and Mrs Jonas".

Reportedly, Sophie’s ‘GoT’ co-star and best friend Maisie Williams was the bridesmaid. The couple were said to have teared up a bit while saying their vows. Priyanka Chopra who is married to Joe’s younger brother Nick Jonas was also there in the group that cheered them on. Priyanka even stunned in one of the functions as she wore a pink coloured saree to the event.

A day before the wedding, Joe and Sophie were seen twinning in bright red outfits at the rehearsal dinner, while their guests were asked to turn up in white. Sophie then too looked breathtakingly beautiful in a simple long red gown with her hair worn down.

The two got married earlier in Las Vegas in a secret ceremony, right after the BBMAs this year. They got engaged in October 2017. See pictures of Sophie Turner and Joe Jonas's love story