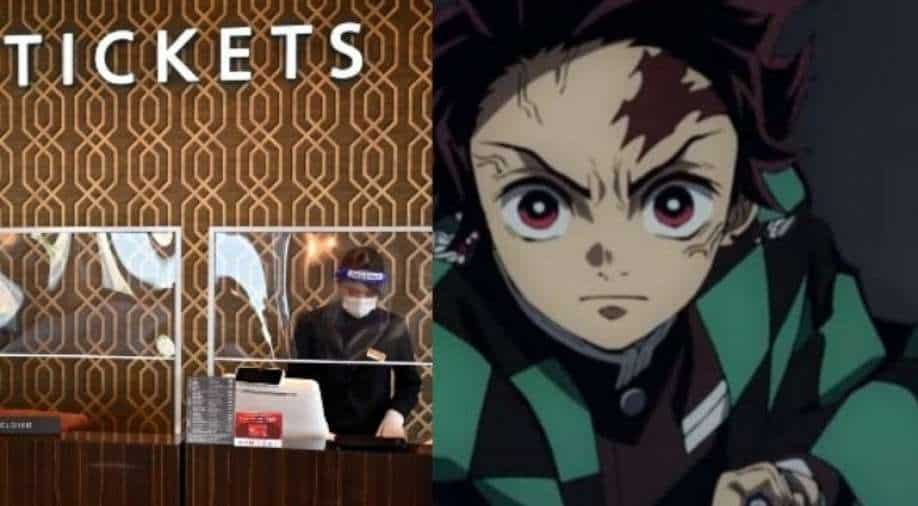 The anime action-adventure “Demon Slayer” is expected to end the weekend with $6.4 million in ticket sales, while “Mortal Kombat” trails closely behind with $6.2 million between Friday and Sunday. Both films debuted last weekend and dipped roughly 70% from their initial outings.

In normal times, those figures would have been somewhat disappointing for nationwide releases but during a pandemic, it’s not a terrible result. Still, it leaves lingering questions about when moviegoing will return in earnest -- and if upcoming potential blockbusters like “A Quiet Place Part II,” Marvel’s “Black Widow” and “Fast and Furious” sequel “F9” will premiere as expected this summer.

“Demon Slayer,” which is playing in 1,915 North American venues, has earned an impressive $34.1 million in the U.S. and Canada to date. The film, from Funimation and Aniplex, has surpassed “Dragon Ball: Super Broly” ($30 million) to become the third-highest grossing anime title in North America.

'Mortal Kombat', a martial arts-inspired adaptation of the popular video game, has grossed $34 million in two weeks. Those receipts are notable because the Warner Bros. release is playing simultaneously on HBO Max. The studio’s entire 2021 slate, including “In the Heights” and “The Suicide Squad,” is following a similar rollout pattern.

Jennifer Lopez and her mom performs at the Global Citizen concert

In third place, “Godzilla vs. Kong,” a Warner Bros. and Legendary film, collected $2.7 million from 2,753 screens. That brings its domestic total to $90 million. The monster mashup has become a hit overseas, where it has grossed $325 million, pushing its global-bounty to $415 million.

The Horror movie “Separation” opened in fourth, pulling in $1.8 million from 1,751 venues. The Open Road and Briarcliff release got terrible reviews, with Variety’s critic Nick Schager calling the supernatural thriller about a creepy doll that haunts a widower and his daughter a “dull and misogynistic affair.” On Rotten Tomatoes, it averaged a dismal 11%.

John Oliver on dealing with COVID-19 misinformation: Please just try as hard as you can

Universal’s action thriller “Nobody” rounded out the top five, amassing $1.2 million in its sixth weekend of release. In total, the Bob Odenkirk-led film has made $23 million. The movie is currently available to rent on demand for $20 due to an agreement between Universal and movie theatre chains like AMC and Cinemark, which allows the studio to debut its films on digital rental services early.

Among specialty releases, “Four Good Days” debuted in 298 venues and earned $303,000 over the weekend, averaging $1,017 per location. The drama, starring Glenn Close as a mother who attempts to help her heroin-addicted daughter (Mila Kunis) pursue sobriety, premiered at the 2020 Sundance Film Festival to mixed reviews.

The Focus Features comedic drama “Limbo” also opened this weekend, grossing $90,000 from 208 theatres for a weak $434 per-screen average. The well-reviewed movie takes place on a fictional remote Scottish island and centres on a group of new arrivals as their await the results of their asylum claims.

'Prey' movie review: A raw, gripping return to franchise's roots, this 'Predator' movie is a must watch

'Four More Shots Please!' season 3 to release on this date