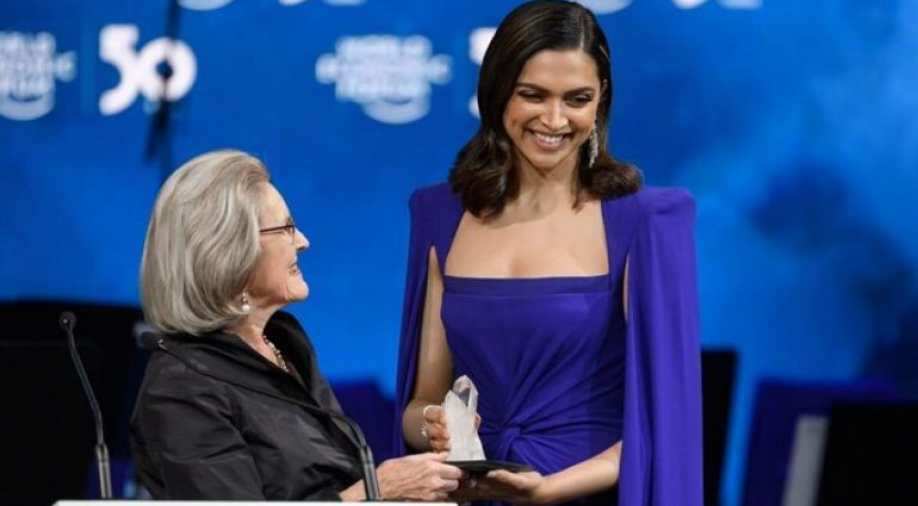 Deepika Padukone was honoured with the annual Crystal Award at World Economic Forum (WEF) 2020 in Davos, Switzerland for her contribution in spreading awareness around mental health.

On Monday, Indian actress Deepika Padukone was honoured with the annual Crystal Award at World Economic Forum (WEF) 2020 in Davos, Switzerland for her contribution in spreading awareness around mental health.

Deepika is the only Indian actress to have received such an honour at Davos summit.

While receiving the award, Deepika spoke about her own struggles battling depression and anxiety and assured scores, mental health patients, that they were 'not alone'. In pics: 6 times Deepika Padukone was awarded internationally for her work beyond cinema

"My love and hate relationship with this has taught me a lot and I want to tell everyone suffering from this that you are not alone," she said.

"One trillion dollars is the estimated impact of depression and mental illness on the world economy," she said while receiving the annual Crystal Award on the first evening of the World Economic Forum (WEF) Annual Meeting 2020.

"In the time it has taken me to accept this award, the world has lost one more person to suicide. That person may have been a father, a mother, a son or daughter, a brother or sister, a friend, a family member or a colleague. Every 40 seconds one person dies by suicide somewhere in the world." she said.

Dressed in a blue gown with her hair pulled back, Deepika kept her look for the evening classy and understated.

"Depression is a common yet serious illness. It is important to understand that anxiety and depression is like any other illness and treatable. It was experience with this illness that encouraged me to set up Live Love Laugh," she said mentioning the foundation she has set up for this cause.

As #wef20 gets underway, @deepikapadukone stresses the importance of addressing mental health issues when building a more sustainable and inclusive world.@TLLLFoundation

The actor received the award on the Martin Luther King Day and quoted the civil rights activist in her acceptance speech."For in the words of Martin Luther King, everything that is done in this world is done with hope," she said.

Deepika was given the award for her leadership in raising mental health awareness -- which she did by going public a few years back with her own experience with anxiety and depression. Also

She later set up her own foundation to provide awareness programs in schools in India, funding for free psychiatric treatment, medical education programs, public awareness campaigns and more.

The actress also recently turned producer with her film 'Chhapaak'. Directed by Meghna Gulzar and co-starring Vikrant Massey, the film earned critical praise for talking about acid-attack survivors but the film failed to make a mark at the box office.