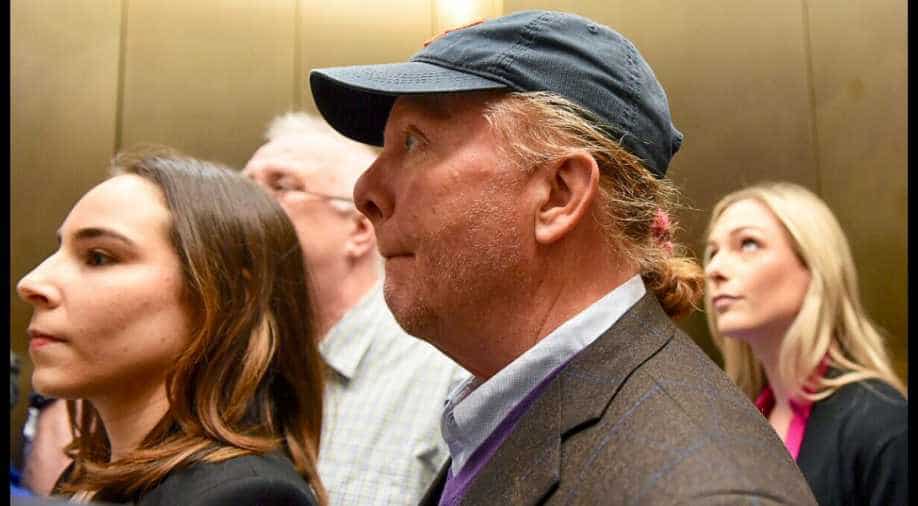 Celebrity chef Mario Batali arrives at court to face a charge of indecent assault and battery in Boston Photograph:( Reuters )

Wearing a baseball cap and blazer, Batali, 58, ignored journalists' questions on his way into and out of Boston Municipal Court, where he was arraigned after being charged with indecent assault and battery.

Celebrity chef and former television star Mario Batali appeared in a Boston courtroom on Friday, where a not-guilty plea was entered on his behalf to a criminal charge that he forcibly groped and kissed a woman at a restaurant in 2017.

Wearing a baseball cap and blazer, Batali, 58, ignored journalists' questions on his way into and out of Boston Municipal Court, where he was arraigned after being charged with indecent assault and battery.

It is the first criminal case against Batali since the 2017 emergence of the #MeToo movement, which has exposed widespread patterns of sexual harassment or abuse of women in multiple spheres of American life and ended the careers of dozens of powerful men in media, politics, entertainment and business.

The woman told police that in March 2017, Batali groped one of her breasts and her buttocks and groin and kissed her face after posing with her for a photograph in a Boston restaurant, according to a criminal complaint.

"The victim stated she was uncomfortable and that it was shocking to her that this was happening," the complaint said.

The lawsuit the woman filed against Batali in August is pending.

Batali was released on his own recognizance on the condition that he avoid contact with the alleged victim. At the request of Batali's lawyer, a judge said that requirement would be waived should he need to testify in her lawsuit.

Batali, who this year sold his stakes in his U.S. restaurants after the accusations against him emerged, denies wrongdoing and "intends to fight the allegations vigorously," Anthony Fuller, his lawyer, said in a statement.

Batali's charisma and culinary flair turned him into a restaurant executive, television star, author and one of the world's most recognizable chefs. He premiered on the Food Network in 1997 on the show 'Molto Mario' and in 2011 helped launch the daytime cooking show 'The Chew' on ABC.

In December 2017, ABC fired Batali after four unnamed women accused him of sexual misconduct that they said spanned at least two decades. The Food Network had also cancelled plans to relaunch 'Molto Mario.'

The New York Police Department started an investigation after CBS '60 Minutes' reported in May 2018 that Batali drugged and sexually assaulted an employee in 2005. Batali denied the report and police later closed the investigation.