BTS: Jimin gets soju shots with Jungkook and J-Hope on his birthday 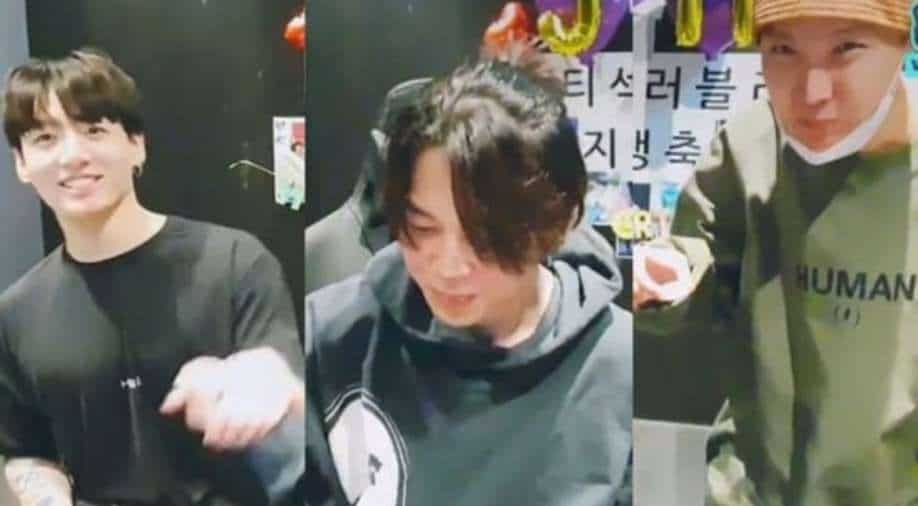 It was BTS singer Jimin’s birthday on Wednesday and fellow BTS members took to social media to share sweet birthday wishes for him.

It was BTS singer Jimin’s birthday on Wednesday and fellow BTS members took to social media to share sweet birthday wishes for him.

On his birthday, Jimin spent some time with the BTS gang, then with the ARMY as he was briefly joined by J-Hope and Jungkook.

The live chat was translated by one Twitter user @doyou__bangtan as the BTS singer revealed he had plans of having dinner with his family. Having spent most of his teenage and early 20s life in Seoul, Jimin confessed he feels awkward spending time on his birthday with his family. The translated tweet goes like, “So while it makes him feel a little awkward to spend his birthday with his parents, he's incredibly glad. In previous years, he'd only be able to receive congratulations from his members and/or friends and have a drink when possible, but to have his parents come up is so special.”

Jimin after interacting with BTS ARMY for a while, asked Jungkook to join who was busy at the gym but joined him soon. Then the duo was joined by J-Hope and the trio had shots of soju (an alcoholic drink from Korea.)

Jimin also said that he saw what all his fans did to make him feel special on his birthday and that he’s grateful for the love. BTS fan Soo Choi translated, “Jimin said when he saw ARMYs before he felt they were like friends or colleagues, like who could put arms around each other's shoulders. However, as times go by, the emotion is even deeper so he felt it's more than a friend now, it's difficult to express.” The singer added that he had to end his live session soon since he was having dinner with his family.

BTS has 23 records at Guinness World Records' Hall of Fame

Meanwhile, the Indian ARMY raised Rs 1.6 lakhs in honour of not just Jimin but also RM and Jungkook's birthdays. The amount will be donated to Habitat for Humanity India, a non-profit organisation that provides affordable shelter, sanitation and housing facilities for those in need.