'Bazaar' review: There is more action at Dalal Street than in this Saif Ali Khan film 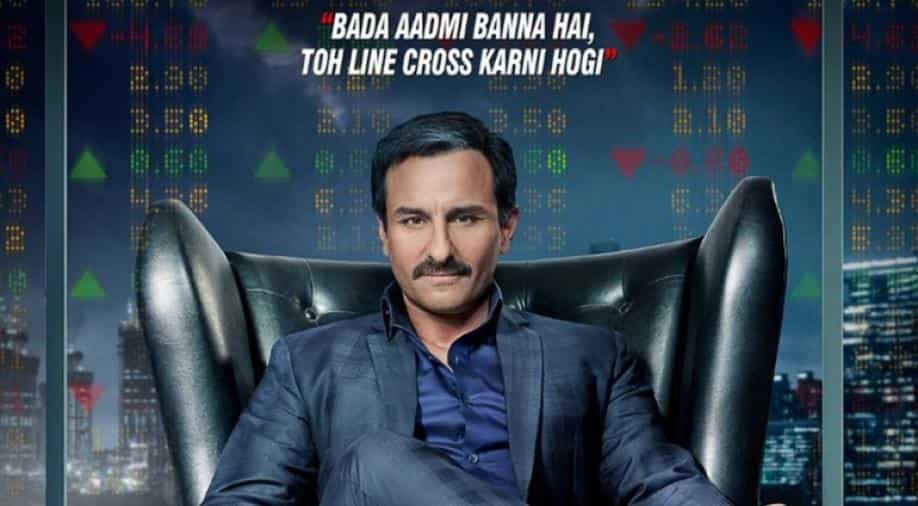 Saif Ali Khan in a poster of 'Bazaar'. Photograph:( Twitter )

When you have Saif Ali Khan headlining a film- your expectations from the film goes a notch higher. The actor may not always deliver blockbusters, but over a two-decade-long career, Saif has chosen some very interesting scripts and roles, which his contemporaries may not play on the big screen.

Naturally, when the trailer of Khan's latest 'Bazaar' came out- the curiosity around the film was higher than the usual. Not only does it feature Khan, but it has 2018's favourite pin-up girl Radhika Apte, along with Chitrangada Singh and debutant Rohan Mehra and revolves around the Dalal street- a first for the Bollywood itself. But is director Gauravv K. Chawla's film worth all the hype? Not quite.

At the onset, its a film of an underdog who by various means- honest and dishonest- has made it big the in share trading business of the country's financial capital. Shakun Kothari (Khan) a big fish in the market, only understands one language- the language of money. A veteran in the trading business, Kothari, is hated and admired in equal measure. Rookie share trader Rizwan Ahmed, a small town boy, comes to Mumbai to 'settle and not struggle' as he repeatedly keeps telling the world. Ahmed lands himself a swanky job in a big share trading firm, gets a smart, glamours girlfriend (Radhika Apte) and even manages to work with his idol Shakun in no time.
Through various song montages, it is established how Shakun and Rizwan develop a unique bond- that of a mentor and disciple. But the bonhomie will obviously not last for long- and the plot in its second half takes a predictable course where Rizwaan a rookie who made in big in too short a time, gets to undo the misdeeds and get back on track.

Now, a film based on share trading and stock market always needs to be oversimplified simply because most viewers may not know the way share-trading works. While the screenplay initially tries to explain the little nitty-gritty of share trading, it gives up soon enough. The screenplay, for some strange reason, gives importance to how the characters stare at each other. Ever-so-often the camera will fixes at one of the actor's faces in the film, trying to capture his or her expression- with no dialogue being spoken by another character at that time. Such moments are in plenty in the film and makes the narrative just longer unnecessarily.

It also doesn't help that the plot is so predictable, that you know at the interval how the film will pan out in the second half and what would be each of the character's trajectory by the end.

Khan though tries to rise up a flimsy screenplay and play the sharp, ruthless share trader with conviction. His character is from Surat and he is made to slip into Gujarati lines ever-so-often which seem unnecessary. But Khan has played similar characters in better-written films before, where you couldn't help but fall for his charm while hating him at the same time. In 'Bazaar' Khan's Shakun is sharp but the impact of his character is much less.

Late actor Vinod Mehra's son Rohan Mehra gives a credible performance too. He has the maximum screen time in the film and delivers a formidable performance- not overdoing it at any time. But ultimately his performance is marred to an extent by a poorly written screenplay. The women in the film, Radhika Apte and Chitrangada Singh are sidelined in this story of power struggle and their scenes are far less than those of the men.

'Bazaar' may have a good set of actors, but ultimately a stretched narrative and poorly written characters mar the film to a great extent. It does have Khan delivering a good performance with a supporting act from debutant Rohan Mehra but ultimately poor writing makes 'Bazaar' long and tedious.