'Badla' review: Amitabh Bachchan and Amrita Singh's performances are the high points of the film 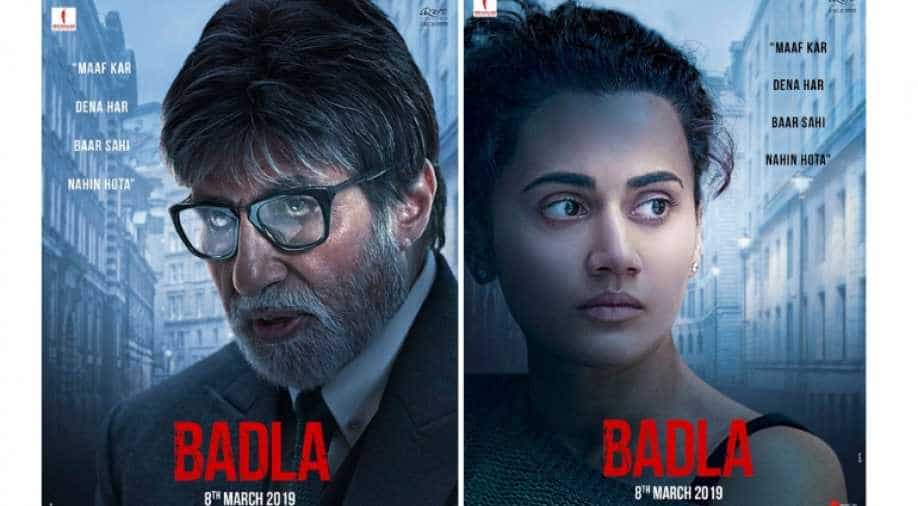 The official posters of 'Badla'. (via Twitter/@iamsrk) Photograph:( Twitter )

An official adaptation of the Spanish classic  'The Invisible Guest', the film's narrative keeps going back and forth. Most of the plot is narrated in flashback and Ghosh, who also serves as the screenplay writer of the film, keeps the audience hooked with numerous plot twists.

Sujoy Ghosh's best work till date, 'Kahaani' till date serves as a textbook example of how a thriller should be. It should ideally keep the viewers hooked till the end and the ultimate ending should rattle you a bit- something that the viewers would not be able to guess. His latest, 'Badla' may not tick all boxes of a perfect whodunnit, but nevertheless keeps you engaged till the end.

The plot is pretty simple. Young business tycoon Naina Sethi finds herself locked in a hotel room with a dead body of her lover Arjun lying in the bathroom. The police naturally think she has murdered him and she needs a good lawyer to get her out of the mess. She meets advocate Badal Gupta, an expert in his field who wants Naina to tell him the truth in order to save her. Over a course of two hours, Badal and Naina sit across each other at the former's dining room as she narrates how she was having affair on the sly and how she is innocent. But who has then killed Arjun? Is Naina telling the truth and is there more to the story than what she is saying?

An official adaptation of the Spanish classic  'The Invisible Guest', the film's narrative keeps going back and forth. Most of the plot is narrated in flashback and Ghosh, who also serves as the screenplay writer of the film, keeps the audience hooked with numerous plot twists. A lot of things are not what they seem to appear and the constant verbal exchange between Bachchan and Pannu keeps one engaged.

The two actors deliver formidable performances. Each matching the other with sharpness and wit. Bachchan, of course, swells in his part as always and its a delight to watch him play the sharp advocate who doesn't want to miss the minutest details even. Pannu, who has shared the screen space with Big B in 'Pink' before, delivers a credible performance for the greater p[art of the film. I wish though she had shown more sharpness- a quality that's attributed to her character Naina. Naina is somewhat cold and a bit self-centered- qualities that don't come out prominently in Pannu's performance too clearly. The other actor who shines immensely in her role is Amrita Singh who returns to screen nearly after two years. Singh infuses just the right amount of charm and vulnerability to her character and its a delight to watch her perform. She should definitely be doing more films!

The cat-and-mouse chase though wears off a bit by the end. If you like whodunnits and have watched innumerable suspense thrillers in your life, you may be able to predict the end, as I did.

The film is shot mostly in shades of grey by cinematographer Avik Mukhopadhyay which sets the tone of the narrative well.

'Badla' makes for a decent watch. Its twists and turns are far more thrilling than the actual plot itself. The performances by the main actors somewhat make up for the predictability in the second half.