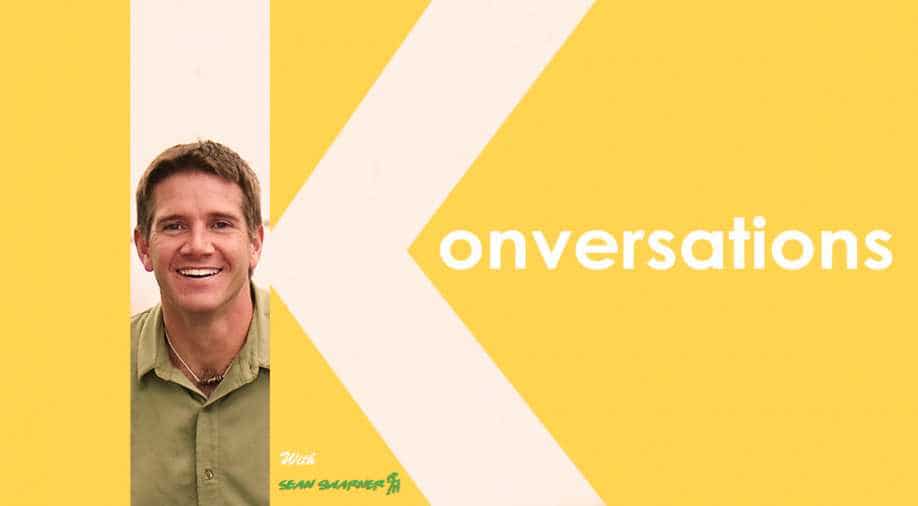 Embrace the positive, enjoy everything you can when life is good, and know the bad times are going to pass. Photograph:( WION )

As a 13-year-old, he was diagnosed with Hodgkin’s disease - a severe blood cancer. Being in the fourth and final stage, doctors declared that he will not live for more than ninety days. However, he fought and survived. At 16, another golf ball-sized cancerous tumor was discovered in his lung. After removal of the Askin’s tumor, Sean Swarner was expected to live for only fourteen days. But he survived again to astonish the medical world.

A decade later and with only one fully functioning lung, Sean became the first cancer survivor to climb Mount Everest, proving to others that nothing is impossible when your determination is rock solid. The journey didn't end there; he completed the Ironman Championship and made it to the top of the Seven Summits, the highest peaks of the seven continents. He is also an author of two inspirational novels and the founder of CancerClimber Association, a non-profit organization for cancer survivors.

Kazimi: What was your state of mind when you were first detected with cancer?

Sean: Since I was only a 13-year-old, I didn’t fully understand how devastating it would be to my life. Being so young, I don’t think I had a full grasp on the concept of life versus death, but I knew I was sick and that if I lost the will and hope to live, I wouldn’t survive.

Sean Swarner at age 13, when he was diagnosed with cancer (WION)

Kazimi: How did you deal with it the second time?

Sean: I knew what I was getting into much better than before because I had been through a year of hell with the chemotherapy, treatments, bloating, loss of hair and everything else that I’d never wish for my worst enemy. I was more scared the second time because I understood what was about to happen – my life was going to be put on hold until I was better again.

I went through the first one, and I sure didn’t want to go through another! I mentally told myself either to fight for my life or give up and die.

Kazimi: What were some thoughts occupying your mind?

Sean: It was difficult in the beginning, I kept asking myself “why me?” Eventually, I realized that it WAS ME and I cannot change the fact that I had cancer, but I could change my thoughts about cancer. In the process of self-healing, I used to picture myself killing cancer in my veins.

Kazimi: So you believe the human mind has the power to heal?

Sean: The power of the human mind is often underestimated. It can heal on many levels, including emotional, physical and psychological. You always have the freedom to choose how you want to perceive the world. No one can make you feel in a certain manner or force their thoughts upon you unless you want to. You always have a choice. It boils down to perspective – instead of seeing a challenge as a challenge, see it from a different angle and look at it as an opportunity.

Kazimi: How would you define hope?

Sean: I believe it’s more than words could ever describe. It’s the feeling we get when we expect a certain outcome and sense an unsaid but unwavering assurance for it to happen. To quote Emily Dickinson, “Hope is the thing with feathers that perches in the soul and sings the tune without words, and never stops at all.”

"Being so young, I don’t think I had a full grasp on the concept of life versus death, but I knew I was sick, and that if I lost the will to live and if I lost hope, I wouldn’t survive" (Source: Facebook, Sean Swarner) (Facebook)

Kazimi: Who has shared hope with you?

Sean: My friends and family are my greatest strength. I also make an effort to grasp something from everyone I meet. We have two ears and one mouth for a reason and if we listen we can learn something new each day.

Kazimi: You are the first cancer survivor to conquer Mt. Everest- What inspired you?

Sean: After surviving cancer twice, I wanted to spread hope among those struggling with the disease. I literally wanted the highest platform in the world to scream hope. I developed interest in mountain climbing only eight months before I went for the Everest. People touched by the disease are fighting for their lives; I can struggle through being cold and a little altitude sickness.

Kazimi: When did you decide to do the Seven Summits?

Sean: I could see the impact my first expedition had made, and I didn't want to stop there. After coming home from Everest, I figured that the rest of those mountains on every other continent couldn’t be harder than Everest, so I went for it.

Sean during his expedition to Antarctica (WION)

Kazimi: What was the scariest moment?

Sean: I've had a number of them and going through cancer definitely is one. Another would be when I was climbing Mt. Denali and fell from a height of 100 feet. I was roped to my climbing partner when I slid 50 feet below him, then another 50 feet below, rocketing down a glacier on the highest mountain in North America.

Kazimi: What impact have you been able to make with your organization?

Sean: We raise funds for cancer survivors who are interested in adventure sports and take them to Mount Kilimanjaro, Africa. These survivors reach out to their own communities and share their survivorship story to inspire others to climb their own proverbial mountains to make more out of their lives.

Kazimi: What is the overall message?

Sean: Even though I speak about different causes in different places, the underlying message is all about “Redefining Your Impossible” and living a life that matters.

Kazimi: Please share a memory when your story impacted others

Sean: At a conference after my presentation, I was addressing the audience. I could tell that the next woman in the queue had been crying because her mascara was running down her face and her nose was red. She came up to me, hugged me, buried her face in my chest and started sobbing. I hugged her back and held her until she was ready to talk. She told me that in the past 6 months, she lost her husband and son to cancer and now she herself, had been diagnosed with the disease for the third time. She had planned on committing suicide and had a suicide note written in her hotel room. She said that my talk changed her mind and that I saved her life. It made me believe that I could make a difference.

Kazimi: Out of all your milestones, which one do you consider your highest?

Sean: I feel the highest milestone is yet to come, maybe it will be when I get married and have a family.

Kazimi: Any words for those going through a hard time in life?

Sean: “This too shall pass,” because it does. Embrace the positive, enjoy everything you can when life is good and know the bad times are going to pass. People get big muscles by pushing against massive weight. In the same way, people build their mental character and strength by pushing through the tough times.