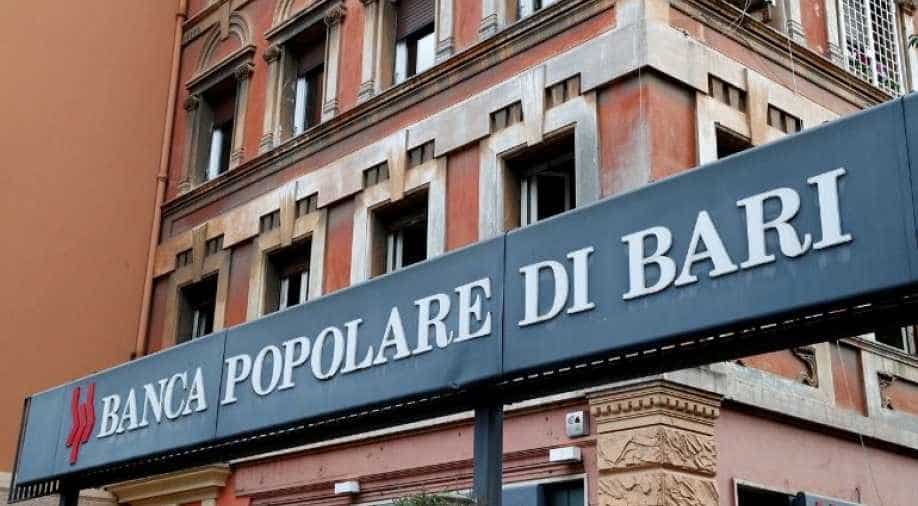 File Photo: The logo of Banca Popolare di Bari bank is pictured outside the company's branch after Italian government approved a bailout for the ailing cooperative lender, in Rome, Italy  Photograph:( Reuters )

The head of Italy's central bank rebuffed criticism of its role in supervising struggling lender Banca Popolare di Bari and said in an interview published on Monday that it was ready to account for its actions.

Prosecutors in the southern Italian city of Bari are investigating the former cooperative bank's chairman for alleged corruption in relation to the central bank's supervisory activity, a judicial source said on Sunday.

The Bank of Italy put Popolare di Bari, the biggest lender in the poorer south of the country, under special administration this month and Rome has agreed on measures worth up to 900 million euros ($997 million) to prop up the unlisted bank.

"Banking supervision has accomplished its duties with the highest effort and, in my opinion, positively," Bank of Italy Governor Ignazio Visco told Il Corriere Della Sera newspaper in an interview published on Monday.

"We are ready to account for our actions, as we have always done, at an institutional level," he said.

The country's banking crisis has shone a spotlight on the Bank of Italy's supervisory role and the ruling 5-Star Movement has called for a reform of how the central bank's top managers are appointed.

Visco said the central bank would, however, assess whether it had made mistakes when asked about Popolare di Bari's takeover of struggling rival Tercas in 2014.

Popolare di Bari's rescue is the latest episode in a string of banking crises to hit Italy since 2015, costing the state and other Italian banks some 23 billion euros.

Visco said some small banks in Italy were still "weak" and the Bank of Italy was closely monitoring them.

"The problem is that we have an insufficient crisis management system. To manage a crisis you don't just need to be able to forecast it, you need tools," he said, without specifying what tools he was referring to.

"I've been asking for a long time for new rules to be established at the European level," he said.

The Bank of Italy was not immediately available for comment.

But he suggested the cooperative bank's 69,000 shareholders, who are mostly retail investors, could book losses.

"The industrial plan will define the amount needed for new capital, the way to carry it out and the involvement of current shareholders," Visco said.

He said the plan would be open to other banks willing to join a larger financial entity with adequate size for the "new technological and competitive environment".